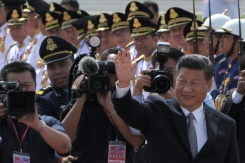 Impoverished Bangladesh needs tens of billions of dollars of investment in transport infrastructure and energy to boost its flagging economic fortunes and create jobs for its 160 million people.

Bangladeshi officials say they expect President Xi Jinping to sign loan and investment agreements worth around $20 billion during his two-day visit as China seeks to woo countries within India's traditional sphere of influence.

He will also formally open an industrial park near the strategic port of Chittagong that Bangladesh hopes will attract Chinese manufacturers seeking cheaper labour than they can find at home.

"Labour costs in China are six-seven times higher than Bangladesh. The Special Economic Zone alone can bring in $5-$7 billion in Chinese investment," said Abdul Matlub Ahmad, head of the Federation of Bangladesh Chambers of Commerce and Industry.

That could create much-needed employment -- Bangladesh's economy has been growing at over six percent in the last decade, but the World Bank says it needs at least eight percent growth to create enough jobs.

Bangladesh's $28 billion garment manufacturing industry is the world's second largest after China's, accounts for 80 percent of the country's annual shipments and employs some 40 percent of its industrial workforce.

New Delhi has long backed Hasina and held off from criticising her re-election in January 2014 in a contest that was boycotted by the opposition and dismissed as "not credible" by Western nations.

"Understandably, India is watching Bangladesh's growing ties with Beijing. But Bangladesh is improving ties with China carefully so that it does not jeopardise its relations with India," he told AFP.

But China, the world's second largest economy, has much deeper pockets.

It has committed to a major programme of infrastructure building stretching from its immediate neighbourhood to Europe through its flagship "One Belt, One Road" policy which seeks to revive the ancient Silk Road trade route.

Asked whether that investment could jeopardise ties with India, Hasina said Bangladesh would maintain "good relations with everyone".

"The purchasing power of our people will increase, and who will be the bigger beneficiary of that in our region? India. India is best poised to benefit from the Bangladeshi market," she said in an interview with Indian daily The Hindu.

CHON BURI: The owner of Mountain B pub was taken to Pattaya Provincial Court on Wednesday for arraignment on two counts in connection with the inferno at the pub that has claimed 19 lives and left many other patrons grievously burned.