Dylan at 75: not knocking on heaven's door just yet
World

Dylan at 75: not knocking on heaven's door just yet

LAS VEGAS - In the fifth row of a packed concert venue in Las Vegas, a plump Hispanic couple slumbers peacefully as Bob Dylan bangs out a tune from his 35th studio album. 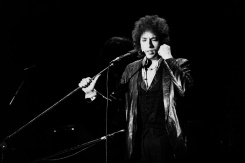 The poet laureate of rock 'n' roll has been going only for 70-odd minutes but -- like many Dylan fans -- they're not getting any younger and it's probably past their bedtime.

Since he entered the national consciousness in the early 1960s, Dylan has been the galvanizing "voice of a generation," an authentic American voice recognized even by detractors for the beauty of his lyrics.

As if proof were needed that his words vault his songwriting into the rarified heights of poetry, he was awarded the Nobel Prize in Literature on Thursday.

Marking the occasion with a sell-out gig in the glitzy Cosmospolitan hotel in Vegas, Dylan attracted more than 3,000 devotees from across the world, if not the age spectrum.

A wizened old rocker strolls through the bar in a bandana and motorcycle jacket, clutching what looks like a pina colada.

But mostly this is the kind of crowd you would expect to see at a concert in a Vegas hotel -- smartly casual in deck shoes, slingbacks and cardigans, well-heeled and well-behaved.

There are some under-40s but perhaps not enough to suggest that Dylan is going to be troubling MTV's playlist any time soon, Nobel or no Nobel.

"We love you, Bob," one fan with a ZZ Top beard shouts out as Dylan sits at his piano for a lively opening rendition of the old favorite "Everybody Must Get Stoned."

"Legend!" cries another as the rocker glides into "Highway 61, Revisited" and "It's All Over Now, Baby Blue," the front rows rising to their feet, giving the gig the ambience of a One Direction show rather than a celebration of 12 bar blues.

But Dylan doesn't really go in for nostalgia, and many of the numbers he plays -- from "High Water (For Charley Patton)" to the lugubrious "Soon After Midnight" -- are from albums released since the turn of the century.

So eloquent on the page, Dylan is also a man of few words -- no words, in fact, when the music stops -- and there isn't so much as a "Hello, Las Vegas" to open proceedings.

And so his fans are left to imagine what the newly crowned Nobel laureate thought of his elevation among such vaunted company as Rudyard Kipling, T.S. Eliot and Ernest Hemingway.

In a set heavy with blues, fans are treated to Dylan on the drums, harmonica and piano -- but not guitar -- during acclaimed but perhaps lesser known songs such as "Simple Twist of Fate," "Love Sick" and "Make You Feel My Love."

The is no "Mr Tambourine Man," "Like a Rolling Stone" or "Subterranean Homesick Blues" and the crowd has to wait until the encore for perhaps Dylan's most famous and poetic song of all, 1963's "Blowin' In The Wind."

"I enjoyed the show. It was kind of short, but I think he's deserving of a prize" says Ray Staniewicz, a 65-year-old who snuck out before the encore.

"He's done a lot for the peace movement since the 1960s, '70s and on till today. The literature, I'm not real familiar with, to tell you the truth."

Gail Wolffe, 70, who has come from Vancouver with her husband of 50 years, 74-year-old Norbert, and their Yorkshire terrier Suzy Q, had never been to a gig before.

"He liked Dylan in the 1960s," she says, referring presumably to Norbert rather than Suzy Q, who it turned out was just three.

"I really liked the new songs. I was amazed because I go for the nostalgia, but what he has brought out now is really good," she adds.

"He's a poet. He speaks of what's happening in the world and he always has. His lyrics are from his heart."