MAUNGDAW, MYANMAR - Three police were hacked to death with machetes in restive northwestern Myanmar Saturday, with their killers shot as they fled, the military said, after authorities claimed homegrown Islamist insurgents were behind a spate of deadly attacks. 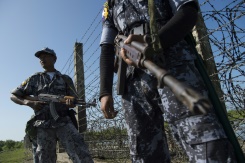 Security forces have killed at least 29 people since raids on police posts along the Bangladesh border on Sunday, according to state media, marking a dramatic escalation in violence in the mainly Muslim area.

The government has blamed the raids on an Islamist group led by a Taliban-trained extremist who spent months training up to 400 recruits with the help of funding from the Middle East.

If true, this would represent a dark new chapter for Myanmar's Muslim Rohingya minority, which has shown little taste for jihadist ideology despite being one of the most repressed peoples in the world.

On Saturday, assailants armed with machetes hacked to death three police in Lake Ai village in Maungdaw, the army said.

"Security officers shot them dead as they ran away after the attack," the military said in a statement.

Troops have poured into restive northern Rakhine since Sunday's raids, locking down an area where most residents are from Myanmar's persecuted Muslim Rohingya minority.

The violence has raised the spectre of the sectarian unrest in 2012 that ripped the impoverished state apart, leaving more than 100 dead and driving tens of thousands of Rohingya into squalid displacement camps.

Rights groups say the military has been gunning down unarmed Rohingya on the streets, but the army says troops have been defending themselves against attackers.

Terrified residents have fled Maungdaw, some leaving on foot with their worldly possessions stuffed into bags and buckets, while others have been airlifted out by military helicopters.

"I haven't come here for five days because I am frightened," said Mamood Raphee, a Muslim Rohingya who works at Maungdaw's jetty.

"I came here today even though I am afraid. We will have nothing to eat if I cannot get work."

At the nearby border, soldiers privately told AFP they were too scared to man the posts for fear of more attacks. Myanmar's president said the local Islamists, known as "Aqa Mul Mujahidin," had "intended to promote extremist violent ideology among the majority Muslim population of the area,".

It named the leader as Havistoohar, a man who has appeared in unverified videos that appear to show armed Rohingya men calling for jihad in landscapes similar to the jungles and rice paddies around the Myanmar-Bangladesh border.

On Saturday another video appeared on social media from a group calling itself the Faith Movement Arakan, in which a group of armed men demand Myanmar's government grant the Rohingya citizenship, let them out of the camps and end wars with other ethnic groups in its borderlands.

AFP has not been able to verify any of the videos.