Mexican airport agents seize $450 million in bonds from US
World

Mexican airport agents seize $450 million in bonds from US

MEXICO CITY - The Mexican authorities have seized $450 million worth of debt securities at an airport near the capital that were sent from the United States to a Mexican company, an official said. 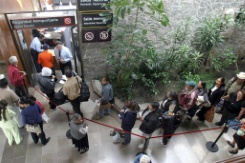 Passengers go through security at Toluca airport in Mexico, where authorities have seized $450 million worth of debt securities

The certificates were sent via a parcel service and found at the Toluca airport marked as "business correspondence," customs agency administrator Ricardo Trevino told local radio.

Trevino said officials know which company sent the securities from the United States and which Mexican firm was the intended recipient.

He declined to identify them but he told Radio Formula that the Mexican company has a "global presence."

A man involved in the operation has also been identified, but Trevino also refused to name him.

The certificates, which were in an envelope, "can be cashed at any bank," he said. They were detected in an X-ray machine.

The authorities will determine whether the certificates stem from legal activities, in which case the penalty would be a fine for not declaring their value according to international rules, which require any amount over $10,000 to be declared at customs.

Trevino, however, said it could also be linked to "tax evasion" and that any crime would be investigated.

The certificates were found as part of a global customs operation undertaken between September 19 and October 10 to detect weapons or money shipments.

Mexico seized a total of $452 million, including the major haul in one action in Toluca, earning plaudits from the World Customs Organization.

Millions hunker down as storm hits eastern US