NICOSIA - Europe has made enormous progress on gay rights since the 1990s, but those gains are now being threatened by rising intolerance, according to activists from across the continent. 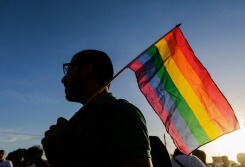 Campaigners at Europe's biggest annual conference on LGBTI (lesbian, gay, bisexual, transsexual and intersex) rights, which ended on Saturday, said a conservative backlash was marginalising them and fuelling attacks.

ILGA-Europe, an umbrella organisation for LGBTI groups, was marking its 20th anniversary in the Cyprus capital Nicosia.

It said the movement had achieved things "we would not have dreamed of back in 1996", with countries passing laws allowing same-sex marriage and letting transsexual people gain legal recognition in their preferred gender.

But conference-goers said hate speech and the scapegoating of LGBTI campaign groups were fuelling a rise in attacks.

KPH president Agata Chaber said the government had created an atmosphere of fear, sacking public servants with a record of promoting LGBTI rights.

Chaber said the KPH's office in Warsaw was attacked in the night with bricks and bottles several times early in 2016.

In March, three men tried to force their way into the office in the middle of the day, before standing outside shouting homophobic slogans, Chaber told AFP.

Seventy percent of Poles thought homosexual relations were unacceptable, the independent Warsaw-based CBOS institute found in a 2014 opinion poll, the most recent survey in the country on the topic.

But the March incident was the worst the group had experienced in 15 years of operation, Chaber said.

"When the authorities in a country... say things that incite hate, you don't only get negative comments on Facebook -- at some point it turns into physical violence."

Phillip Ayoub, an assistant professor at Drexel University in Philadelphia, told AFP: "We've seen a lot of successes in Europe. Many of the leaders in LGBTI rights are European countries.

"That said, we do see some backsliding in recent years."

He said the migrant crisis had sparked a rise in rightwing activism and nationalist rhetoric around protecting traditional values from outside threats.

"LGBTI people fall under the bus with that as well," he said.

Several activists at the conference said organised activism against LGBTI rights was growing in countries across Europe.

Tens of thousands of protesters demonstrated in Paris this month against a 2013 law legalising same-sex marriage.

Ayoub said populist politicians in Poland, Hungary and other European countries were presenting gay rights as a threat to family values.

"That's been promoted by key figures around the globe including the Russian state and the Orthodox church," he said.

As tensions with Brussels spiralled over Ukraine in 2014, some of Russian President Vladimir Putin's supporters took to calling Europe "Gayropa" and promoting Russia as the antithesis of the West.

"Moscow saw it advantageous to define itself as a protector of traditional values in broader geo-politics," said Ayoub.

Ayoub said legislation such as a law in Latvia against "homosexual propaganda" was attempting to remove LGBTI symbols from the public sphere altogether, leading to activists being arrested for things such as waving rainbow flags at demonstrations.

ILGA-Europe's Executive Director Evelyne Paradis said the LGBTI movement across Europe was making "revolutionary" gains in some areas, but that public figures in some countries were feeling more free to fuel homophobia.

She said LGBTI people "feel less secure and they take less risk. There's a greater risk in being visible," she told AFP.

"(LGBTI) people are not accessing governments any more, they're not part of consultations... they're being kept out by their national politicians."