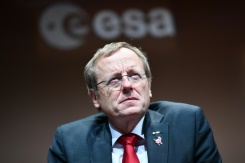 "I propose to go on with the ExoMars 2020 mission, but we need money for that," ESA Director General Jan Woerner tells AFP

The mission saw a spacecraft successfully placed in Mars orbit last month, but a tiny test lander that was to pave the way for a planet-exploring rover, crashed.

The rover has been scheduled for launch in 2020, to scour our neighbouring planet for signs of life -- present or past.

"I propose to go on with the ExoMars 2020 mission, but we need money for that," Woerner told AFP on the sidelines of a press conference in Paris, specifying "several hundred millions".

"I hope we will convince the member states (of ESA) that we go on with that programme," he said. "I would be very sad if we stop the programme."

The budget will be discussed by representatives of the ESA's 22 member states at a special meeting on ExoMars on November 21 and 22, after which Woerner will make his case to a meeting of ESA ministers in Switzerland in December.

The agency is still investigating what caused the failure of its Mars lander Schiaparelli, which crashed on October 19 -- Europe's second failed attempt to reach the Red Planet's alien surface.

The agency had budgeted 1.5 billion euros ($1.7 billion) for the joint ExoMars mission with Russia, of which Schiaparelli cost 230 million euros.

The rover's launch had already been delayed by two years over funding concerns.

In phase one of ExoMars, the Trace Gas Orbiter (TGO), with Schiaparelli on board, was launched into space in March and travelled seven months and 496-million kilometres (308 million miles) to the Red Planet.

The TGO then entered Mars' orbit as planned, while Schiaparelli was meant to make a soft landing to test vital technology for the eventual rover -- the project's second phase.

But Schiaparelli fell silent seconds before its scheduled touchdown, and was later confirmed to have crashed.