BEIJING - A Chinese company whose name sounds like "Trump wins big" saw its stock surge Wednesday as the Republican candidate's odds improved in the US presidential poll. 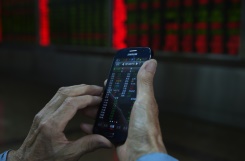 Shares in Shenzhen-listed Wisesoft, a computer software company whose Chinese name "chuan da zhi sheng" is a homophone for "Trump wins big", rose 4.6% by the noon break, even as the wider market fell.

At the same time shares in the Yunnan Xiyi Industrial company, whose name sounds like the Mandarin word for "Hillary shares" plunged 9.5% on the Shenzhen exchange.

Mainland Chinese stock exchanges have an unusually high proportion of non-professional investors, and have been criticised for casino-like behaviour, with insider trading and dramatic swings in share prices seemingly unconnected to underlying business prospects.

The US presidential election has drawn widespread interest in China, with people sharing images of the rolling election results on the popular social media platform WeChat.

Despite Trump's tough talk on China's trade policies he has some admirers in the country.