Mystery thickens over whether Van Gogh 'notebook' is real
World

Mystery thickens over whether Van Gogh 'notebook' is real

PARIS - It was, on the face of it, one of the biggest art world discoveries in years. 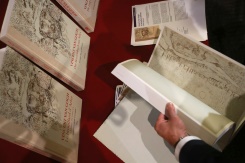 A book of drawings from Dutch post-impressionist painter Vincent Van Gogh at the architecture academy in Paris on November 15, 2016

The sketches from the tormented genius' furiously productive time in Arles -- where he cut off his ear after a fight with his friend the painter Paul Gauguin -- seemed to shine a new light on some of his greatest masterpieces.

Except at the very moment the highly respected French publishing house Le Seuil was unveiling copies of the 65 sketches to reporters in Paris Tuesday, the Van Gogh Museum in Amsterdam was calling them fakes.

That despite the fact that two internationally renowned experts on the Dutch artist had pronounced them to be real.

The doyen of the field, 85-year-old British art professor Ronald Pickvance had even called the sketches "the most revolutionary discovery in the entire history of Van Gogh's oeuvre".

Within hours the academic disagreement had turned into "slanging match" in the media, with the museum accused of "jealousy" and the judgement of both sides being called into question.

So how could specialist opinions be quite so divergent on one of the world's best known and most expensive artists?

Quite easily, according to Stephen Farthing, Professor of Drawing at the University of the Arts London, and a member of the Royal Academy.

"There is no absolute way of being certain that anybody made anything," he told AFP.

With drawings, it all boils down to "connoisseurship", he argued, because forgers are often well aware of how to beat the science.

"I met one very good forger and he went to quite a lot of trouble to get the right paper and ink... There is a methodology to forgery."

Philippe Costamagna, one of France's leading curators, said the business of authenticating art was a minefield.

"It is not an exact science and sometimes we make mistakes. That is the problem and the danger of this profession," said the director the Museum of Fine Arts in Ajaccio.

With vast sums of money at stake -- seven paintings by Van Gogh have made the top 30 highest auction prices ever -- reputation is everything.

Bogomila Welsh-Ovcharov, the Canadian scholar who has staked hers on the drawings being genuine, has already authenticated the so-called Yasuda Van Gogh "Sunflower" painting, which set a new world record when it was sold for $40 million in 1987.

Her book, "Vincent Van Gogh, the fog of Arles: the rediscovered sketchbook" detailing the find, will be published in six countries on Thursday despite the controversy.

It suggests that the drawings come from a ledger from the Cafe de la Gare in Arles that its owners gave to the artist while he was staying there in 1888.

And on Wednesday Welsh-Ovcharov came out fighting the Van Gogh's Museum's damning description of the sketches as "imitations".

She accused them of basing their decision on photographs of the drawings rather than the 10 originals she had brought to them in 2013.

"I spent 50 minutes with two of their experts... there was no discussion, no dialogue," she told France Culture radio. "I left that particular conversation totally frustrated... I later discovered they had seen the drawings in 2008 and 2012 and they had made their decision based on photographs."

Professor Farthing said that although the museum "obviously has a very good reason to dismiss them... I doubt whether studying even high resolution photographs is the best way to establish whether a drawing is genuine or not."

"You need a long conversation with other experts and not go it alone," he said.

Welsh-Ovcharov insisted the drawings were "incontestably" Van Gogh's. I am certain these are his drawings, and that they show we have to revise the way we think Van Gogh worked."

She said she always knew "this sort of discovery was going to bring an awful lot of cynicism with it".

Although not a Van Gogh expert, and having only seen one reproduction, Professor Farthing said that "if it is a Van Gogh it has a very light touch, a much lighter touch than what I would normally associate with him.

"He puts a lot of pressure on the paper when he draws because he was a troubled man... Compared to Ingres for example, Van Gogh is a kind of mud wrestler."

But forgeries of sketchbooks were rare, he said.

"It is pretty unusual to go to all of the work of faking up a sketchbook. You may as well make up one drawing if you are in it for profit."

While everyone loves the fun of the hunt for a forger, he said, it was not beyond the bounds of possibility that "someone could have made the book innocently as a kind of homage" to Van Gogh.

That said, its supposed discovery in the ruins of "The Yellow House", where Van Gogh lived with Gauguin, after the Allies bombed Arles in 1944, "was almost too good to be true... It ties up questions about provenance rather too neatly," he said.