Filipino military officers salute the flag over the coffin of late dictator Ferdinand Marcos during burial rites at the Heroes' Cemetery in Pasay City, south of Manila, on Friday. (AP Photo)

MANILA: Long-dead former Philippine dictator Ferdinand Marcos was buried on Friday at the country's Heroes' Cemetery in a secrecy-shrouded ceremony, a move approved by President Rodrigo Duterte that infuriated supporters of the "people power" revolt that ousted Marcos three decades ago.

Marcos's daughter, Imee, expressed relief after her father's interment at the heavily guarded cemetery in metropolitan Manila, which she said fulfilled his last wish.

Enraged pro-democracy activists, however, stressed the decades-long debate over the ex-president's final resting place was far from over and protested across the metropolis.

Bonifacio Ilagan, a left-wing activist who was detained and tortured during Marcos's rule, said the dictator was buried "like a thief in the night" in a stealthy fashion similar to when he suddenly placed the country under martial rule. A lawmaker considered asking the Supreme Court to exhume the newly buried Marcos.

"It's very much like when he declared martial law in 1972," Ilagan told The Associated Press. "This is so Marcos style. I want to rush to the cemetery to protest this. I feel so enraged."

Marie Hilao Enriquez, a former political detainee whose sister, a fellow activist, was raped and killed by policemen, wept upon learning the news.

"Marcos died in the arms of his family" but many Marcos-era activists remain missing after being allegedly abducted by state forces, Enriquez said at a protest.

"We are still searching for the victims' bodies, trying to find out where they buried the bodies."

Imee Marcos thanked those who "were with us in hoping and praying for nearly three decades to see this day".

President Duterte, who gave the go-ahead signal for the burial, called for calm.

"Hopefully, both sides will exercise maximum tolerance and come to terms with the burial," Duterte's spokesman, Ernesto Abella, quoted him as saying after the president landed in Peru, where he is attending a summit of Asia-Pacific leaders.

Marcos's widow, Imelda, who was clad in black, and her children attended the simple ceremony, along with dozens of relatives and friends.

After landing at an air base, Marcos's remains were brought by a black limousine to the cemetery, where his flag-draped wooden coffin was placed on a caisson and later carried by military pallbearers to the gravesite, military spokesman Brig Gen Padilla said.

A 21-gun salute by military honour troops rang out during the burial ceremony.

"We rendered the simplest of honours befitting the former president in compliance to the desire of the family," Padilla said.

Asked why the burial was kept from the public, Padilla said it was the Marcos family's desire "to keep it private".

Still, the burial shocked many democracy advocates and human rights victims who had planned protests nationwide Friday against Marcos's interment at the cemetery, where former presidents, soldiers and national artists have been buried, unaware that funeral plans were already underway.

Burying someone accused of massive rights violations and plunder at the heroes' cemetery has long been an emotional and divisive issue in the Philippines, where Marcos was ousted by a largely nonviolent army-backed uprising in 1986. At the height of the political turbulence, Marcos flew to Hawaii, where he lived with his wife and children until he died in 1989.

The powerful family has repeatedly denied any wrongdoing and Imelda Marcos and two of her children eventually ran for public office and won stunning political comebacks. One son, Ferdinand "Bongbong" Marcos Jr, ran for vice president earlier this year and lost by a slim margin.

In 1993, Marcos's body was taken to his hometown in Ilocos Norte, where it has been displayed in a glass coffin and became a tourist attraction. But his family fought for his remains to be transferred to the heroes' cemetery.

Duterte, who took over the presidency in June, backed Marcos's burial at the cemetery, saying it was his right as a president and soldier. It was a political risk in a country where democracy advocates celebrate Marcos's ouster each year.

Last week, the Supreme Court dismissed seven petitions, including from former torture victims, which argued that an honorable burial for the dictator was "illegal and contrary to law, public policy, morals and justice".

Opponents planned to appeal the court decision within a 15-day period but were pre-empted by Friday's surprise burial. They said the Marcos family should be cited by the court for contempt.

The court ruled that Marcos was never convicted by final judgement of any offense involving moral turpitude, adding that the convictions cited by anti-Marcos petitioners were civil in nature.

While critics may disregard Marcos as president due to his human rights abuses, the court said he cannot be denied the right to be acknowledged as a former legislator, a defense secretary, a military member, a war veteran and a Medal of Valour awardee.

"While he was not all good," the 15-member court said, "he was not pure evil either". 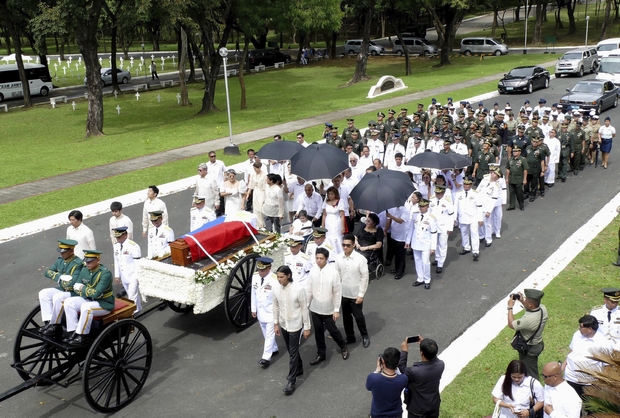 Imee and Imelda Marcos and other relatives follow the flag-draped casket of Ferdinand Marcos during a ceremony at the Heroes' Cemetery near Manila on Friday. (AP Photo)

US, Iran face off in winner-takes-all World Cup showdown