'Protectionism must be defeated': Peru president 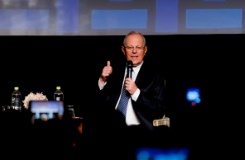 "In the US and Britain, protectionism is taking over," Kuczynski told leaders from the 21-member Asia-Pacific Economic Cooperation group (APEC), whose annual summit has been rocked by Donald Trump's US election victory and Britain's "Brexit" vote.

"It is fundamental that world trade grow again and that protectionism be defeated," he said as the summit opened in the Peruvian capital Lima.