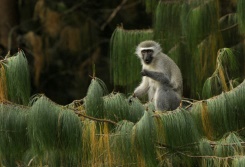 As in humans, it turns out, social incentives can be just as big a driver for male monkeys to go to war as the resources they stand to gain from fighting, whether it be territory or food.

"Ours is the first study to demonstrate that any non-human species use manipulative tactics, such as punishment or rewards, to promote participation in intergroup fights," study co-author Jean Arseneau, a primate specialist of the University of Zurich, told AFP.

Arseneau and a team studied four vervet monkey groups at a game reserve in South Africa for two years.

They observed that after a skirmish with a rival gang, usually over food, females would groom males that had fought hardest, while snapping at those that abstained.

When the next battle came along, both those singled out for attention and those aggressively shunned would participate more vigorously in combat, the researchers reported in the journal Proceedings of the Royal Society B.

"Thus, females appear to use grooming as a reward for participation and aggression as punishment for defection", said Arseneau.

Vervet monkeys live in mixed-gender groups and both sexes take part in frequent battles with rival troupes. Only a handful fight each time.

Males are larger than females and have longer canine teeth, making their presence valuable on the front lines.

Success in battle ensures control over territory and food sources -- a key concern for females, who take care of the young.

But why would males risk involvement in a potentially high-stakes battle just for a bit of female attention?

It's all about sex, the researchers believe.

"Receiving punishment" for not taking part in battles "could damage the... male's social relationship(s)" with females in the group, the researchers wrote.

On the other hand, being rewarded could "potentially signal to other female group members that the... male is a valuable social partner", likely boosting "male mating success".

In group animals, such as humans, a delicate balance must be maintained between participating in hunting or defence, which can be risky, and free-riding, which is less hazardous but can lead to social rejection.

The riskiest group activity of all is warfare, and few animals other than humans and monkeys engage in it.

US, EU hail 'fresh start' with truce in planemaker feud

US hiring surges in February as Democrats move on stimulus

Queen's husband Philip moved back to private hospital to recover