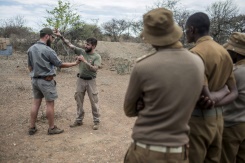 Now all three are back in action, this time fighting what they describe as a "war" against poachers in southern Africa as the killing of rhinos escalates into a crisis that threatens the survival of the species.

Faced with such slaughter, conservationists and government authorities have been desperately searching for ways to protect the animals.

Many ideas have been tried, including drones, tracking dogs, satellite imagery, DNA analysis, hidden cameras and even cutting horns off live animals before poachers can get to them.

But the killing has continued, and now military veterans from the United States, Australia and elsewhere have been drafted to bring their expertise to the uphill battle to save the rhinos.

"You can not go to the communities and ask them nicely to stop. This is a war. We are fighting a war out there."

- Lessons from the frontline -

Mander, who spent three years serving in Iraq, is the founder of the International Anti-Poaching Foundation, which supports anti-poaching rangers through training and promotes "direct action" to protect rhino.

"The only thing that is going to buy time for (conservation) initiatives is well-trained, well-equipped rangers who are willing to go every day and risk their lives," he said.

Wearing a military jacket, his arms covered in tattoos, Lynn Westover is putting his military background to good use by running a two-day training course on a reserve in the northern province of Limpopo.

Attended by a dozen rangers and local ranch owners, the course, which is packed with military jargon, offers a wide range of instruction from how to disarm poachers to analysing footprints and even communicating with helicopter pilots.

Westover, 35, says his military career, which took him from Afghanistan and Iraq to Nigeria and also saw him working in southeast Asia, Latin America and Nigeria, has given him valuable experience to pass on.

"I am still doing the same kind of work, but I am changing who I am impacting for a greater good," said Westover, an American who comes from Seattle.

"It is repurposing because you feel a sense of unity and pride. I feel that I am giving these rangers a better chance of survival."

Another veteran finding a new purpose in the South African bush is 'John' -- a pseudonym -- who agrees that ex-servicemen bring unique skills to the poaching problem.

"The behaviour of a poacher, a drug trafficker or terrorist is the same," he said.

But the so-called "green militarisation" of anti-poaching work -- a term for the involvement of ex-military in conservation work -- has aroused strong criticism, with some saying local men suspected of being poachers are being killed indiscriminately.

No figures are available, but some of the dead are from Mozambique, which borders on South Africa's Kruger National Park.

"It alienates local people and turns conservation areas into fortresses," said Libby Lunstrum, a professor at Canada's York University who specialises in poaching.

Without giving numbers, she told AFP that "a lot" of young men had been shot and buried in the border area.

"It has a devastating impact on communities who are less likely to support conservation because they see park rangers as people who kill their loved ones."

Even so, charity groups such as the International Fund for Animal Welfare (IFAW) are also tapping into battlefield expertise and hiring former US intelligence officers.

"It is not unusual to see animals killed by automatic weapons," Celine Sissler-Bienvenu, a director of IFAW, told AFP.

"When we are in a war context, we have no other means than to respond using a similar force."

For ranch owners like Howard Knott, who attended the training course, any assistance is welcome as demand for rhino horn soars in China and Vietnam, where it is prized for its alleged medicinal properties.

Knott has lost four rhinos in the last two years, while one neighbour lost four in just one week this October.

"We really appreciate what they have come to do and teach our guys," he said.