US growth revised up sharply in third quarter to 3.2%
World

US growth revised up sharply in third quarter to 3.2%

WASHINGTON - The world's largest economy grew even faster than initially thought in the third quarter, based in large part on a jump in spending, the US Commerce Department said Tuesday. 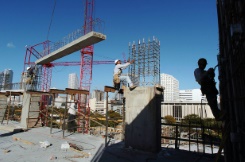 The US economy is growing at its fastest rate since 2014, according to the Commerce Department

According to a revised GDP report, the economy grew at an annual rate of 3.2 percent, three-tenths higher than the initial estimate published last month, which was already the fastest rate in two years.

A consensus analyst forecast had called for a more modest upward revision to 3.0 percent, from the 2.9 percent initial estimate.

The results showed an even more emphatic upswing at the start of the second half of 2016. Anemic growth in the first half helped convince US monetary policymakers to forego a planned course of interest rate hikes during the year.

However, the US Federal Reserve is widely expected to increase rates from their historically low levels when it meets next month.

Based on a more comprehensive set of data, the revised GDP showed US consumers spent more on construction for single-family housing, while investment in non-residential structures was revised upwards to 10.1 percent from 5.4 percent.

The report also showed sharp gains in consumer spending on auto parts and retail sales in "other" non-durable goods, including newly available data from the Bureau of Alcohol Tobacco and Firearms.

The personal consumption expenditures price index was unchanged at 1.4 percent.