SINGAPORE - Oil prices resumed their rise Thursday and held above the $50 barrier following OPEC's decision to carry out its first output cut in eight years. 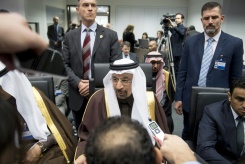 The Organization of the Petroleum Exporting Countries has agreed on specific targets to enact a preliminary deal struck in September designed to ease a global crude supply glut and boost prices.

The Organization of the Petroleum Exporting Countries at a meeting in Vienna on Wednesday agreed on specific targets to enact a preliminary deal struck in September designed to ease a global crude supply glut and boost prices.

Many analysts had expected the producers' cartel to fail to reach a deal as major players like Iran, Iraq and Saudi Arabia remained divided ahead of the meeting.

"Not only had hopes of higher prices been realised, the reputation of the Opec has also been salvaged, prompting the surge," said Jingyi Pan, market strategist at IG in Singapore.

"Sceptics have now placed their focus on the implementation of the Opec deal where Saudi Arabia will be shouldering the bulk of the cut."

The 14-member Opec agreed to lower its monthly output by 1.2 million barrels per day (bpd) to 32.5 million bpd from Jan 1.

Qatar's Energy Minister Mohammed Bin Saleh Al-Sada said non-member Russia committed to reducing its output by 300,000 bpd, half of a hoped-for 600,000 bpd reduction from outside the organisation.

Prices had fallen to near 13-year lows of below $30 a barrel in February from peaks of more than $100 in June 2014 largely due to an oversupplied market outpacing demand.