JAKARTA - Foreign governments Thursday warned their citizens to keep away from a major rally in the Indonesian capital Jakarta by Muslim groups against the city's Christian governor amid fears it could turn violent. 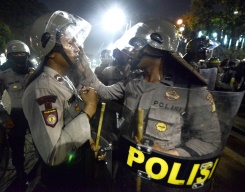 At least 150,000 people are expected to flood downtown Jakarta to protest against Basuki Tjahaja Purnama, who has caused widespread anger in Indonesia by allegedly insulting Islam

At least 150,000 people are expected to flood downtown Jakarta Friday to protest against Basuki Tjahaja Purnama, who has caused widespread anger in the world's most populous Muslim-majority country by allegedly insulting Islam.

A protest on November 4 against Purnama, who is being prosecuted for breaking Indonesia's tough blasphemy laws, attracted about 100,000 demonstrators and ended in violence, with one person killed and hundreds injured in clashes.

The American embassy in Jakarta warned in a message to US citizens that "even demonstrations intended to be peaceful can turn confrontational and escalate into violence".

"Some extremist groups could take advantage of the December 2 events to incite or carry out violence," it said, adding that Americans should avoid the demonstration.

The Australian government warned its citizens: "We strongly advise you to avoid all protests as they may turn violent... Maintain a high level of vigilance and security awareness."

More than 20,000 police and soldiers will be deployed to secure Friday's rally which could dwarf the earlier protest against Purnama, who is known by his nickname Ahok.

Authorities and Islamic leaders have agreed to restrict the demonstration to a major park around a downtown monument and the event is scheduled to end by 1 pm (0600 GMT).

During the last protest, clashes began in the evening when hardliners refused to disperse, with protesters hurling missiles and police responding with tear gas and water cannon.

Police named Purnama a suspect in a blasphemy investigation earlier this month following the protest, as calls mounted from Muslim groups for him to be prosecuted for allegedly insulting the Koran while campaigning for February governorship elections.

The governor, who is also a member of Indonesia's tiny ethnic Chinese minority, is set to go on trial and faces up to five years in jail if found guilty.

The only candidate for chairman of a tambon administration in Prachuap Khiri Khan province has died, a day before the first local election in eight years takes place.

Health authorities in Germany have identified the first suspected case in the country of the new Covid-19 variant, in a person who returned from South Africa.

Vying with vultures: Widespread poverty has some Hondurans living off rubbish