THE HAGUE - In one of the biggest takedowns to date, police across the globe have smashed a massive criminal network providing online services including malware attacks that infected half a million computers worldwide, Europol said Thursday. 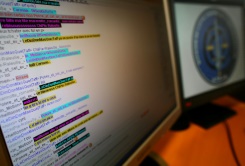 Known as "Avalanche", the criminal network "was used as a delivery platform to launch and manage mass global malware attacks and money mule recruiting campaigns," Europe's policing agency said in a statement.

The network would be contacted by other criminal groups to send emails to specific victims containing malware to steal bank details and passwords as well as to conduct so-called distributed denial of service (DDos) spam attacks.

"Victims of the malware infections were identified in more than 180 countries," it said from its fortress-like headquarters in The Hague.

The damage caused ran into "hundreds of millions of euros" and in Germany alone -- where the gang's activities were first detected -- some six million euros ($6.3 million) in losses were reported as a result of "concentrated cyberattacks on online banking systems."

Police from as far afield as Australia, Belize, India and Singapore, together with 25 other countries pounced on Wednesday after a four-year operation, arresting five top network bosses, seizing 37 servers and searching 39 premises. Europol would not say in which countries the five were held.

"Avalanche functioned like a company -- and we have arrested its 'chief executive' and 'board members'," said Fernando Ruiz, operations chief at Europol's EC3 Cybercrime Centre.

"They had different branches that catered for different crimes -- and even had a customer service section to help their clients," Ruiz told AFP.

Law officials also shut down 221 other servers and seized or blocked some 800,000 internet domains in the "unprecedented" operation.

The operation was supported by Europol, the continent's judicial cooperation agency Eurojust, Interpol, the US Attorney's Office, the FBI and private companies.

The suspects face charges in different countries all related to being involved in organised crime.

"Avalanche, one of the world's largest and most malicious botnet infrastructures has been decisively neutralised in one of the biggest takedowns to date," she said.