Italy's Renzi announces he will resign at 1800 GMT
World

Italy's Renzi announces he will resign at 1800 GMT

ROME - Italian Prime Minister Matteo Renzi announced he would resign at 1800 GMT Wednesday, three days after suffering a stinging defeat in a referendum on constitutional change. 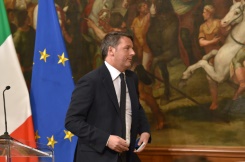 Matteo Renzi will resign at 1800 GMT

The centre-left leader had announced he would step down immediately after the vote but was persuaded to stay on until the completion of parliamentary approval of Italy's 2017 budget, which happened on Wednesday.

"Budget law approved. Formal resignation at 1900. Thanks to everyone and viva l'Italia!" ("long live Italy!"), Renzi wrote on Twitter.

There had been speculation that Renzi would delay his final departure until Friday -- Thursday being a public holiday in Italy -- to give his party more breathing space.

The leadership of Renzi's centre-left Democratic Party (PD) was to meet later Wednesday for talks that will be crucial to his hopes of making a comeback at the next election.

The party is beset by internal divisions that were painfully exposed by Renzi's battle to modify Italy's constitution.

An election must be held by February 2018 but opposition parties are clamouring for it to be held up to a year early, saying the vote was effectively a vote of no confidence in the centre-left coalition.

Renzi reportedly favours a new election in two months time but there are several obstacles to that happening.