New action in Italy to shore up top bank
World

New action in Italy to shore up top bank

PARIS - UniCredit said Thursday it had agreed to sell off its holding in the Polish bank Pekao as Italy's top lender scrambles to raise funds amid rising market uncertainty. 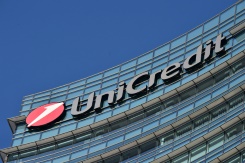 The announcement came as the EU's economy commissioner Pierre Moscovici said "we're not worried about a banking crisis" in Italy after Matteo Renzi stepped down as prime minister on Wednesday and the nation's third-largest bank asked for an additional month to avoid a state-imposed bailout.

Italy's Monte dei Paschi di Siena (BMPS) asked the European Central Bank on Wednesday for more time to raise the cash it needs to avoid a state-led recapitalisation that would hit many retail investors in the bank.

Meanwhile, UniCredit announced on Thursday the latest in a series of asset sales to boost its capital position.

The deal sells off a 32.8 percent stake in Bank Pekao S.A. to insurer PZU, which is partially owned by the Polish state, and the state-owned Polish Development Fund for 10.6 billion Polish zlotys ($2.6 billion, 2.4 billion euros), and is expected to close in mid-2017.

Another 7.3 percent stake in Pekao shares will be converted into certificates and settled by December 15, 2019, allowing Unicredit to benefit from an expected increase in the Polish bank's share price.

UniCredit will also transfer to PZU and PFR its holdings in several Polish firms, for 634 million zlotys.

"UniCredit's sale of its entire stake in Pekao is a tangible demonstration of the strategic approach... to focus on reinforcing and optimising its capital position, whilst maintaining strategic flexibility to seize value creating opportunities," the bank said in a statement.

It said the transaction would raise its CET1 capital ratio, which stood at 10.82 percent at the end of September, by 0.55 percentage points.

The CET capital ratio is an important gauge of a bank's ability to resist a financial crisis, and UniCredit was among the worst performers in stress test results published by Europe's EBA banking regulator in July, falling to 7.1 percent in one simulation of adverse market conditions.

After having sold several assets, including already a 10 percent stake in Pekao, the bank said in October it said it would need 7.38 billion euros ($10.47 billion) in fresh capital to meet new European rules.

Investors are concerned UniCredit will be forced to tap the markets to raise new capital when confidence is low in the midst of a political and banking crisis in Italy.

UniCredit's share price has fallen by half this year, meaning existing shareholders stand to see a considerable dilution of their holdings if the bank sells new shares.

UniCredit plans to announce its strategic plans to raise capital to investors at a meeting on December 13 in London.

The bank's shares slid 0.08 percent in morning trading while Milan's FTSE-Mib index was up 0.4 percent.