BEIRUT - Syrian government artillery bombarded the fast-shrinking rebel enclave in the heart of Aleppo on Friday despite its ally Russia's announcement of a new humanitarian pause, a monitor said. 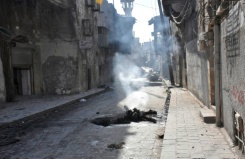 The charred body of a rebel fighter lies on a street in the Bab al-Hadid neighbourhood, in Aleppo's Old City

Air strikes halted on Thursday evening following Moscow's announcement but shelling continued throughout the night and into the morning, the Syrian Observatory for Human Rights said.

An AFP correspondent in the rebel-held enclave reported hearing the boom of artillery through the night.

After talks with US Secretary of State John Kerry in the German city of Hamburg on Thursday, Russian Foreign Minister Sergei Lavrov announced a pause in the army's assault to allow for the evacuation of some of the tens of thousands of civilians trapped in the now tiny rebel enclave.

The army has recaptured 85 percent of the eastern sector of the city which the rebels had held since summer 2012.

"I can tell you that today combat operations by the Syrian army have been halted in eastern Aleppo because there is a large operation under way to evacuate civilians," Lavrov said. "There is going to be to a column of 8,000 evacuees."

In Washington, White House spokesman Josh Earnest said Lavrov's announcement was "an indication that something positive could happen".

The army's bombardment of rebel-held districts killed at least 18 civilians on Thursday, according to the Observatory, a Britain-based monitoring group which has a wide network of sources on the ground.