ALEPPO (SYRIA) - The Syrian army captured a major district of Aleppo on Monday from rebel fighters, now confined to a small pocket of their former bastion in the city's east. 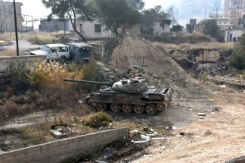 A tank rumbles through Aleppo's Ithaa district after Syrian pro-government forces retook the area from rebel fighters on December 11, 2016

President Bashar al-Assad's forces held more than 90 percent of the onetime opposition stronghold, a monitor said, and appeared on the verge of retaking the whole city.

The fall of Aleppo would deal rebels their worst blow since the beginning of Syria's conflict in 2011, and leave the government in control of the country's five major cities.

The Syrian Observatory for Human Rights monitoring group reported early on Monday that the army had captured the large Sheikh Saeed district in southeast Aleppo, leaving only two neighbourhoods under opposition control.

"The areas still under opposition control are very small, and they could fall at any moment," said Rami Abdel Rahman, the director of the Britain-based Observatory

"The battle for Aleppo has begun to enter the final phase," he said.

Syrian official media confirmed the army had recaptured Sheikh Saeed, with state television showing what it said was live footage from the neighbourhood.

Overnight and into Monday morning, government warplanes and artillery pounded the remaining rebel-held territory in the east of the city.

An AFP correspondent in the government-held west of Aleppo said the bombardment could be heard from there and was some of the heaviest in recent days.

Terrified residents have poured out of rebel-held neighbourhoods as the army advanced since beginning its operation on November 15.

The Observatory said Monday another 10,000 people had fled rebel areas in the previous 24 hours, bringing the total number of those who have left -- mostly to government-held territory -- to 130,000.

It said approximately half were transferred to temporary shelters, while the rest were staying with relatives in west Aleppo.

Syria's rebels seized control of east Aleppo in 2012, a year into an uprising that began with anti-government protests but spiralled into a civil war after a regime crackdown.

The war has become a complex multi-front conflict, drawing in proxy powers and jihadists like the Islamic State group, which on Sunday overran the city of Palmyra nine months after being expelled.

IS began a new offensive in the desert east of Homs province last week, seizing government positions and oil fields before advancing on Palmyra.

It was briefly forced back from the city early Sunday, after heavy Russian air strikes and the arrival of Syrian troop reinforcements.

But despite the efforts, the Observatory said Sunday afternoon that the group had recaptured all of the city.

IS held Palmyra between May 2015 and March 2016, carrying out a campaign of destruction against ancient ruins in the city that are a UNESCO World Heritage site.

On Monday, the jihadists were advancing south and west of Palmyra, fighting fierce clashes with the army near the town of Al-Qaryatain, the monitor said, as Russian warplanes carried out fresh strikes.

More than 300,000 people have been killed in Syria's war, and over half the country displaced.

The government assault on Aleppo has killed at least 413 civilians since mid-November, according to the Observatory. Another 139 civilians have been killed in rebel fire on the west of the city in the same period, it says.

The UN children's agency said Sunday that all children in Aleppo were suffering from trauma.

"I have never seen in my life such a dramatic situation (as) what is happening to children in Aleppo," said Radoslaw Rzehak, UNICEF's field office head inside the devastated city.

Diplomatic efforts to bring an end to the conflict have repeatedly failed.

Russia last week said talks were under way with US officials on securing a ceasefire in Aleppo and the withdrawal of all rebel forces from the city.

But despite a series of high-level meetings there was no progress in halting the fighting.

Experts say the government's recapture of Aleppo appeared to be only a matter of time.

"We're now past the point where the opposition has any hope of pulling things back," said Yezid Sayigh, a senior associate at the Carnegie Middle East Center in Beirut.

Assad "will have in effect broken the back of the armed opposition... and the idea that the regime can be overcome militarily will be finally put to rest."