WARSAW - Maybe they should have said "Pardonu, li ne estas fama sufiĉa" -- which is of course Esperanto for "Sorry, he's not famous enough". 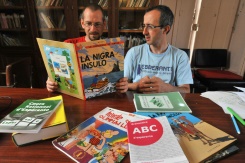 The city hall in Bialystok, Poland has refused to honour a UNESCO-sponsored "Zamenhof Year" in 2017 commemorating Ludwik Zamenhof, its native son who invented the international language, officials said Friday.

Zamenhof, a Jewish physician, was born in the northeastern city in 1859 and died in Warsaw in 1917. He invented Esperanto as a universal communication tool in 1885.

Councillors for the conservative ruling Law and Justice party (PiS) voted against the Zamenhof Year commemorating the 100th anniversary of his death, Przemyslaw Wierzbowski, head of the Bialystok Esperanto society, told AFP.

Wierzbowski said the councillors -- who narrowly rejected the project by 12 votes against 11 -- saw Esperanto as a dead language that has no value for mankind.

In fact, Esperanto became an unprecedented international success and linguists say up to a million people still use it.

Konrad Zieleniecki, spokesman for PiS councillors in Bialystok, told AFP that Zamenhof was "an important Bialystok man and deserved the commemoration."

But he added he had voted against because the city had already decided to celebrate next year's 150th anniversary of the birth of Josef Pilsudski, the father of Poland's independence.

He said the decision was also due to a local political conflict between PiS and city president Tadeusz Truskolaski, who "is looking to use Zamenhof for political goals" and take control of the Zamenhof Centre, an autonomous institution.

"It's a bad and sad decision," said Wierzbowski.

"Over the years Zamenhof seemed to us to be an unquestionable icon of our city, a symbol that made Bialystok famous worldwide."

Zbigniew Nikiforowicz from the opposition liberal Civic Platform told AFP the decision was due to "an unfavourable stance inside PiS towards anything that is not ethnically Polish".

He also slammed the "growth in Catholic nationalism" which "would like to forget about the history of Bialystok, a city almost half-Jewish in the 19th century and until World War II."