Gambians turn back to migration as political impasse drags
World

Gambians turn back to migration as political impasse drags

BANJUL (GAMBIA) - Ansu Sanyang was ready. Sick of providing so little for his parents and sisters with any work he could find, the young Gambian resolved to take the migrant route through Libya to Europe. 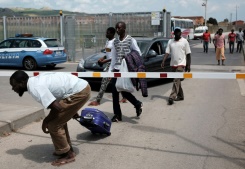 Then on Friday, December 1, he hesitated, hanging back to cast his vote in a presidential election that felt different to previous years.

"I changed my mind," said Sanyang, a couple of days after longtime President Yahya Jammeh accepted defeat and seemed willing to leave office after 22 years.

"I was glad, very glad, because I had hoped that that man (would) get this," the 25-year-old added, referring to the unexpected election victory of self-made real estate developer Adama Barrow.

Weeks later, the elation Sanyang felt has turned to uncertainty over the vote's disputed outcome, while his life and those of thousands of other Gambians are left hanging in the balance.

A nation of fewer than two million people, The Gambia accounts for the highest number of migrants per capita of any nationality crossing the sands of the Sahara through Niger to Libya where they board rickety boats that ply the Mediterranean to Italy.

That a man like Barrow, who struggled financially before establishing himself as a businessman, could one day become Gambian president had lit a small flame of hope for the young in this poor west African country.

"There is a crisis in The Gambia, that's why everyone is taking the Back Way (migrant route)," Barrow told AFP earlier this month.

Combining study with grinding work as a security guard in London, Barrow has lived the migrant experience himself.

"You hear the name Europe, you think it's heaven. It's never like that," he said.

Jammeh however has taken a different line. "Anybody who wants to migrate, let them migrate," he said recently. "It's a matter of taste, migration is a choice, it's not because of poverty."

When he isn't helping on the boats, Sanyang breaks bricks at construction sites, or does whatever job he is told is available that morning in the neighbourhood, labouring until nightfall.

There was resignation in his voice as he admitted he was once again thinking of leaving, after it became clear Jammeh would not go without a fight. Desperate Gambians feel they have no time to waste.

"Decades before, Gambians were not travelling across Africa, but now you see kids aged 12, 13, 14 joining them," said student Mbembe Kuyateh, 25, after Friday prayers in the Westfield district on the outskirts of the capital, Banjul.

"Many of my friends left The Gambia. Some drowned in the Mediterranean Sea and some made it to Europe," Kuyateh said.

Others describe the villages upriver where there are almost no men aged between their late teens and early 40s.

"I couldn't believe it, they had all gone the Back Way," said one Banjul-based diplomat who passed through such a village on a recent trip.

The scars left by the departed who never reached the shores of Italy are visible all around The Gambia.

Samba Mbengu, a mechanic, recalls the endless fights he had with his brother, Ali "Mille Franc" Mbengu, a rising star on the wrestling circuit who worked as a tailor by day.

"He insisted he wanted to travel and in order to convince him (to stay) I bought him a sewing machine, but even after all that he wouldn't give up," Mbengu recalled.

After months of arguing, Mbengu agreed to finance the trip, and stayed in close contact with his brother as he made his way through to Libya.

"I never anticipated I was going to spend this much money," he told AFP, refusing to give a precise figure but admitting it was more than 100,000 dalasis ($2,300).

"He called me telling me how much pressure they came under from the agents over there, and how sometimes they could be maltreated if the money isn't sent on time," Mbengu added.

One week in November, his brother's usual phone calls stopped.

Looking up at the ceiling of the tailor shop to compose himself, Mbengu recalled the moment one of his brother's fellow travellers told him Ali had drowned.

"It has traumatised us... that's all I can say," the mechanic added, looking away.

The first time he had readied himself to leave, Sanyang didn't even tell his closest family about his decision, describing the deep shame he felt at being the eldest son, the breadwinner, but unable to provide enough so his parents could stop working.

The Gambian economy has suffered several blows in the last three years, making life extremely hard for those without connections to the ruling party or family in Europe sending back remittances.

A 2013 drought was followed by the region's Ebola crisis, which despite never actually touching The Gambia itself scared off tourists who account for 20 percent of GDP.

Then a dispute over tariffs with Senegal, whose territory surrounds The Gambia, effectively cut the country off from supplies for months.

Sanyang believes that betting his life on a journey to Europe may still be worth it.

"I have a lot of friends telling me I should do it. I must do something for the family," Sanyang said. "It's no good for me to sit here."

Former world number one Carolina Marin breezed into the final of the Thailand Open on Saturday, beating South Korea’s An Se-young 21-19, 21-15.

NAKHON RATCHASIMA: At least 10 workers have been hurt after an elevated section of a ring road under construction in Muang district collapsed.