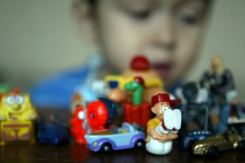 Salice had been undergoing treatment for a stroke in a hospital in the northern Italian town of Pavia, his Color Your Life foundation and Italian media reports said Friday.

He joined the Ferrero food group in 1960 and went on to become right-hand man to company boss Michele Ferrero, a visionary who invented the Nutella chocolate and hazelnut spread and who died in 2015.

In the 1970s, the chocolate baron was seeking a means to get around the seasonal nature of Easter eggs and find a use for the manufacturing moulds that served no purpose for much of the year.

The outcome was the Kinder Surprise, a chocolate egg containing little plastic parts of toys to be assembled by children. The contents of the capsules inside the eggs varied widely and the success of the product was swift and lasting.

Ferrero has sold billions of Kinder Surprise eggs in more than 40 years and claims that its monthly output consists of enough chocolate to pave the 400,000 square metres (4.3 million square feet) of the Monterrey Macroplaza in Mexico.

"The inventor is Ferrero, I was just the material executor," Salice often repeated, but he played a part in the creation of other renowned products such as the Ferrero Rocher and Pocket Coffee.

The Turin native retired in 2007 with a bonus of 400,000 euros ($422,000). He invested the sum in his Color Your Life campus on the Italian Riviera, aimed at enabling children aged between 13 and 18 to foster their strongest talents.

The huge success of Kinder Surprise eggs has on occasion been overshadowed by tragedy, including the death in Toulouse last January of a little girl aged three who choked on a toy. After an investigation the prosecutor cleared Ferrero.

The eggs are banned in the United States under a 1938 law prohibiting the insertion of any objects into food products, while in Chile they were banned last summer under new legislation to combat obesity.