VIENNA - The Vienna Philharmonic rung in 2017 with its famed New Year's Concert on Sunday under the baton of the orchestra's youngest-ever conductor, charismatic Venezuelan Gustavo Dudamel. 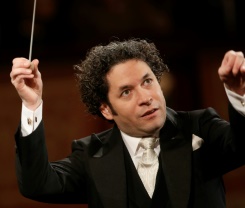 The 35-year-old, who currently leads the Los Angeles Philharmonic, follows in the footsteps of giants such as Herbert von Karajan, Claudio Abbado and Zubin Mehta.

"An incredible honour to lead this year's New Year's Concert," Dudamel tweeted hours before the glittering event, broadcast live in more than 90 countries and watched by millions of people.

The annual "Neujahrskonzert" held inside the Great Hall of the exalted Musikverein in Vienna is largely dedicated to the 19th-century Strauss composer family.

The 2017 programme twirled through waltzes, polkas and marches before ending with the legendary Radetzky March by the elder Johann Strauss.

The finale also featured the much-loved Blue Danube by his son Johann Strauss, which is celebrating its 150th anniversary next month.

But every edition also has some variety and this year's non-Strauss pieces included Otto Nicolai's The Merry Wives of Windsor.

At one point, the lighthearted event saw a group of young ballet dancers burst into the gilded hall and pirouette their way through the seated public.

At the end of the two-and-a-half-hour show, a visibly elated Dudamel received a standing ovation, including from Foreign Minister Sebastian Kurz who was among the many personalities in attendance.

"(Conducting the Blue Danube) means now I can die in peace," the maestro had euphorically told a press conference in Vienna on Thursday.

Shortly after Sunday's performance, the Vienna Philharmonic announced that a familiar face will return to the stage for the next edition -- Italian great Riccardo Muti who will conduct the concert on January 1, 2018 for the fifth time.

The event started life on December 31, 1939, under the Nazis but in the subsequent years these dark beginnings were forgotten and it gradually became a regular highlight in the classical music calendar.

In the 1980s after the 25-concert reign of Austrian Willi Boskovsky and six-times American successor Lorin Maazel -- who died this year -- it was decided to have a different conductor each year.

Due to extremely high demand, tickets for the concert are drawn by lottery at the beginning of each year.