UAC Global Plc, an MAI-listed chemical trader that has diversified into renewable energy, is expected to seal a deal to sell power from its 20-megawatt power plant to the Myanmar government in the first quarter. 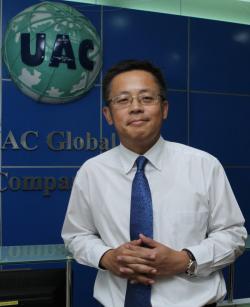 The company expects the deal to push total revenue to 1.8 billion baht in 2017.

UAC president Chatchaphol Prasopchoke said it is building the first phase of the plant, which will have a capacity of 10MW. The second phase, due to start soon, will generate the remaining 10MW.

"We're focusing on ventures that we've just invested in, including the power business, whose capacity we decided to increase in order to boost revenue to 1.8 billion baht this year," said Mr Chatchaphol.

He said the 20MW power plant in Myanmar is worth 1.1 billion baht and the company is in talks with banks to secure loans for it.

"It will take about two years to complete construction and the project is expected to start commercial operations in 2019," he said, adding that the internal rate of return will be higher than 15%.

The company also plans to invest in a waste-to-power project in Laos with power-generating capacity of 5MW.

For its chemical trading business operated by its fully owned subsidiary, UAC Advance Polymers and Chemicals Co Ltd, the company plans to double production capacity of latex to 20,000 tonnes per year.

UAC also plans to list UAC Advance Polymers and Chemicals on the Market for Alternative Investment by 2018 to raise funds for the expansion of its chemical business.

The purchase of the two power plants with a combined power-generating capacity of 6.9MW will be done through the company's subsidiary, UAC Energy Co.

UAC shares closed yesterday on the MAI at 6.20 baht, up 10 satang, in trade worth 7 million baht.

RATO DERO, Pakistan: Since his son was diagnosed with HIV during a mass outbreak in Pakistan among babies and children, hard-up Shahzado Shar has often been forced to choose between food and medicine.