Two people later died during protests against the court's decision, which capped a stunning fall for Ms Park, the country's first female leader who rode a wave of lingering conservative nostalgia for her late dictator father to victory in 2012, only to see her presidency crumble as millions of furious protesters filled the nation's streets.

The ruling by the eight-member panel opens Ms Park up to possible criminal proceedings -- prosecutors have already named her a criminal suspect -- and makes her South Korea's first democratically elected leader to be removed from office since democracy replaced dictatorship in the late 1980s.

It also deepens South Korea's political and security uncertainty as the country faces existential threats from perennial rival North Korea, reported economic retaliation from a China furious about Seoul's cooperation with the US on an anti-missile system, and questions in Seoul about the new Trump administration's commitment to the countries' decades-long security alliance.

Ms Park's "acts of violating the constitution and law are a betrayal of the public trust'', acting chief justice Lee Jung-mi said. "The benefits of protecting the constitution that can be earned by dismissing the defendant are overwhelmingly big. Hereupon, in a unanimous decision by the court panel, we issue a verdict: We dismiss the defendant, President Park Geun-hye.''

Mr Lee accused Park of colluding with her longtime confidante and private citizen Choi Soon-sil to extort tens of millions of dollars from businesses and letting Mrs Choi meddle in state affairs and receive and look at documents with state secrets. Those are the allegations that prosecutors have already raised, but Ms Park has refused to undergo any questioning, citing a law that gives a sitting leader immunity from prosecution.

It is not clear when prosecutors will try to interview with her.

Ms Park won't vacate the presidential Blue House on Friday as her aides are preparing for her return to her private home in southern Seoul, according to the Blue House. Ms Park wasn't planning any statement on Friday, it said.

Ms Park's lawyer, Seo Seok-gu, who had previously compared Ms Park's impeachment to the crucifixion of Jesus Christ, called the verdict a "tragic decision'' made under popular pressure and questioned the fairness of what he called a "kangaroo court".

South Korea must now hold an election within two months to choose Ms Park's successor. Liberal Moon Jae-in, who lost to Park in the 2012 election, currently enjoys a comfortable lead in opinion surveys.

Pre-verdict surveys showed that 70% to 80% of South Koreans wanted the court to approve Ms Park's impeachment. But there have been worries that Ms Park's ouster would further polarise the country and cause violence between her supporters and opponents. 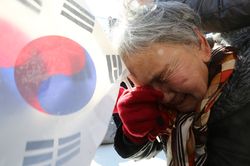 Sensing history, thousands of people -- both pro-Park supporters, many of them dressed in army-style fatigues and wearing red berets, and those who wanted Ms Park gone -- gathered around the Constitutional Court building and a huge public square in downtown Seoul.

A big television screen was set up near the court so people could watch the verdict live. Hundreds of police were on hand, wearing helmets with visors and black, hard-plastic breastplates and shin guards. The streets near the court were lined with police buses and barricades.

Some of Ms Park's supporters reacted with anger after the ruling, shouting and hitting police officers with plastic flag poles and climbing on police buses. Anti-Park protesters celebrated by marching in the streets near the presidential Blue House, carrying flags, signs and an effigy of Ms Park dressed in prison clothes and tied up with rope.

The Seoul Metropolitan Police Agency said two people died while protesting Park's removal. An official from the Seoul National University Hospital said that a man in his 70s, believed to be a Park supporter, died from head wounds after falling from the top of a police bus.

An official from the Kangbuk Samsung Hospital in Seoul said another man brought from the pro-Park rally died shortly after receiving CPR at the hospital. The hospital official couldn't immediately confirm the cause of death. (continued below) 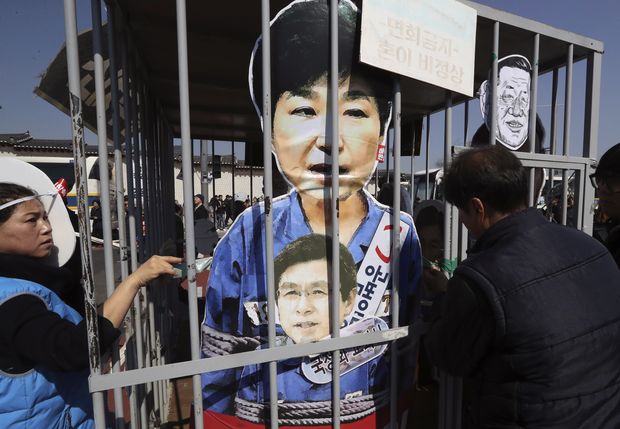 Protesters look at cutouts of impeached President Park Geun-hye, top, and acting leader and Prime Minister Hwang Kyo-ahn (bottom) in a mock jail as they march toward the presidential house after the Constitutional Court's verdict in Seoul. (AP photo)

Ms Park's parliamentary impeachment in December came after weeks of Saturday rallies that drew millions who wanted her resignation. Overwhelmed by the biggest rallies in decades, the voices of Park supporters were largely ignored. But they've recently regrouped and staged fierce pro-Park rallies since.

Since she's now no longer in power, prosecutors can summon, question and possibly arrest her. Her critics want to see Ms Park appear on TV while dressed in prison garb, handcuffed and bound like others involved in the scandal. But some analysts worry that could create a backlash by conservatives ahead of the presidential vote.

Among the most serious problems facing South Korea is China's retaliation against the deployment of a US high-tech missile defence system in the South. Ties with North Korea are terrible, with Pyongyang seeking to expand its nuclear and missile arsenal. Japan hasn't sent back its ambassador, which it recalled two months ago over history disputes. South Korea also worries about the Trump administration asking for a greater financial contribution for US troop deployment in the South.

Prime Minister Hwang Kyo-ahn has led the government as acting leader since Ms Park's impeachment, and he will continue to do so until South Korea elects new president by May. Some media reports said Mr Hwang might run for president as a conservative candidate. If that happens, he would have to resign to run and a deputy prime minister would become interim leader.

In 2004, then President Roh Moo-hyun was impeached by parliament for alleged election law violations and incompetence, but the Constitutional Court later reinstated his power. 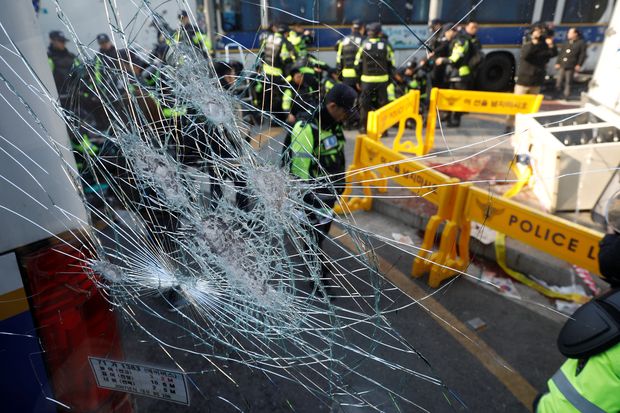 A view through a broken bus window of the scene where a supporter of impeached President Park Geun-hye was injured during a protest. (Reuters photo)