A truck carries giant logs felled illegally in a Cambodian national park, according to the Environmental Investigation Agency. (EIA photo)

A damning report by a UK and US-based NGO alleges that systemic bribery in Cambodia and Vietnam has enabled wood logged in protected forests in Cambodia's Ratanakkiri province to be smuggled over the border.

According to an article in the Khmer Times, in a five-month long investigation by the Environmental Investigation Agency (EIA) between November and March, the group allegedly found 300,000 cubic metres of wood were harvested on an “unprecedented scale” from two national parks and one wildlife sanctuary in the Cambodian province before being smuggled to Vietnam.

Provincial authorities, however, categorically denied the bulk of the allegations in the report, saying instead that any timber removed in the area was a miniscule amount and purely for local villagers to use in celebrations or for prayer ceremonies.

“I don’t understand their assertions,” Ratanakkiri provincial chief of environment Phun Khemrin said. “I recognise there is small-scale logging carried out by villagers. But there aren’t huge amounts like 300,000 cubic metres as what they claimed.”

Neither Lor Chanreaksmey, a spokesman for the Cambodian Ministry of Agriculture, Forestry and Fisheries nor Ung Sam Ath, chief of the Forestry Administration could be reached for comment.

Environment Minister Say Samal declined to comment, saying he had yet to read the report.

The EIA said the wood was taken from Community Protected Areas in Virachey and Ou Ya Dav national parks, as well as Lumphat Wildlife Sanctuary.

In those five months, the report claimed that kickbacks received by both Cambodian and Vietnamese officials to allow what they termed as  “organised crime” were estimated to top $13 million.

“This is the single largest log-smuggling operation that we have seen for years. Vietnam must address this weak approach to any agreement with the EU to combat illegal logging and the associated trade,” EIA senior forests campaigner Jago Wadley said.

He was referring to a Voluntary Partnership Agreement set to be signed between the European Union and Vietnam as part of the EU Forest Law Enforcement, Governance and Trade Action Plan.

In an EU statement dated November 17, EU Environment Commissioner Karmenu Vella and Vietnamese Minister of Agriculture and Rural Development Nguyen Xuan Cuong pledged to “work together towards reducing illegal logging and promoting trade in legally produced timber between the EU and Vietnam through an ambitious licensing system for Vietnamese timber and timber products”. 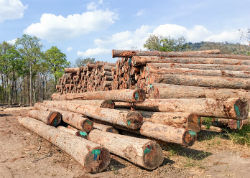 The report details how illegally logged wood is sourced in the province, with alleged kickbacks given, before being smuggled into Vietnam and entering a web of trade and corruption.

“Not only are Vietnamese officials corruptly profiting but so too is the Vietnamese state, formally taxing the illegal traffic of logs and so effectively taking a cut of the criminal businesses it has sanctioned.

“Vietnamese timber traders pay millions of dollars in bribes to local officials here to open up logging areas and smuggling routes in Cambodia; they allegedly told undercover investigators how they also have to pay bribes of up to $45 a cubic metre to Vietnamese officials, including the Chairman of Gia Lai Provincial People’s Committee, customs and border army personnel in return for quotas allowing them to import into Vietnam,” the report read.

The EU delegation in Vietnam could not be reached for comment.

Cambodian Human Rights Task Force chief Ouch Leng said the findings of the report came as no surprise because the illicit trade had been going on for decades with the help of corrupt officials.

“This is not the first time this has happened, it has been going on for decades. This is systemic. The government must ensure that all officers are clean and not involved in the timber business,” Mr Leng said.

This occurred against the backdrop of Vietnam’s strenuous efforts to increase its own forest covers, imposing strict controls on domestic logging.

A total ban was implemented in Vietnam last year and by 2015, the country’s forest cover increased by 14.7 million hectares amounting to 44.6% of total land areas.

In 1990, the country only had nine million hectares of forest cover.

She explained that select people in her “timber network” would lobby senior officials at the border station on the Cambodian side to allow the transport of the timber in exchange for a cut.

Officials allegedly also informed traders of whenever high-level inspections would occur, during which all logging would come to a temporary halt.

A logistics agent in the Vietnamese port city of Quy Nhon suggested bribes to officials were in the millions of dollars, despite the Cambodian government’s ban on the export of timber to neighbouring countries.

“Under the table money to the local side is a big amount. They need to give money in order to be allowed to exploit areas with big trees and high-value timber,” Mr Phong from Hung Anh Company Ltd was quoted as saying.

Once across the border, Vietnamese officials inspect logs entering the country to ensure they meet companies’ quotas and also to check that none of the timber originates from Vietnam.

Officials in Vietnam’s Gia Lai province do not check to see if the timber was illegally sourced, thus legitimising the transactions.

“The findings reveal how Vietnamese state and security officials have issued and administered formal quotas facilitating the legalisation of illegal timber,” the report says.

“These quotas have incentivised and facilitated illegal logging on a massive scale in neighbouring Cambodia, precisely at a time when that country is publicly seeking to stop all timber trade with Vietnam,” the report claimed.

Irish PM warns of 'spiral back' as N.Ireland wracked by week of riots