Indonesian President Joko Widodo (second from left) and the general manager of China Railway Corp Sheng Guangzu (centre) stand next to a train model as they attend a groundbreaking ceremony for the Jakarta-Bandung fast-train railway line in Walini, West Java province, on Jan 21, 2016. (Reuters photo) 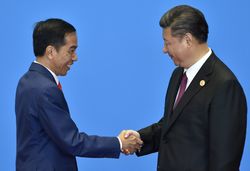 The head of the consortium, Hanggoro Budi Wiryawan, and the chairman of China Development Bank, Hu Huaibang, signed the loan in Beijing on Sunday, during a bilateral meeting between Indonesian President Joko Widodo and China's President Xi Jinping, according to a statement issued by Mr Widodo's office.

Mr Widodo was in Beijing to attend the Belt and Road Forum for International Cooperation.

Indonesia picked China over Japan to build the country's first fast-train rail link connecting its capital Jakarta to the textile hub of Bandung in 2015.

The loan would cover 75% of total costs, which are expected to reach $6 billion, Mr Wiryawan was quoted by Tempo.co as saying.