9/11 commemorated in US, Thailand
World

9/11 commemorated in US, Thailand

A man pays his respects at the Wall of Names at the United Flight 93 National Memorial in Shanksville, Pennsylvania. (AP photo)

NEW YORK - Holding photos and reading names of loved ones lost 16 years ago, 9/11 victims' relatives marked the anniversary of the attacks at ground zero on Monday with a solemn and personal ceremony.

Every Sept 11 since the date of the deadliest terror attack on American soil, Rob Fazio has come to the place where his father, Ronald Carl Fazio, and thousands of others died.

"I'll come every year for the rest of my life," the son said. "It's where I get my strength."

Thousands of family members, survivors, rescuers others gathered for the hours-long reading of victims' names at the World Trade Center, while President Donald Trump spoke at the Pentagon and Vice President Mike Pence addressed an observance at the Flight 93 National Memorial near Shanksville, Pennsylvania.

Nearly 3,000 people were killed when terrorist-piloted planes hit those three sites, hurling America into a new consciousness of the threat of global terrorism. Most were Americans, but several hundred were of dozens of nationalities.

The two Thai victims also were remembered by their families. 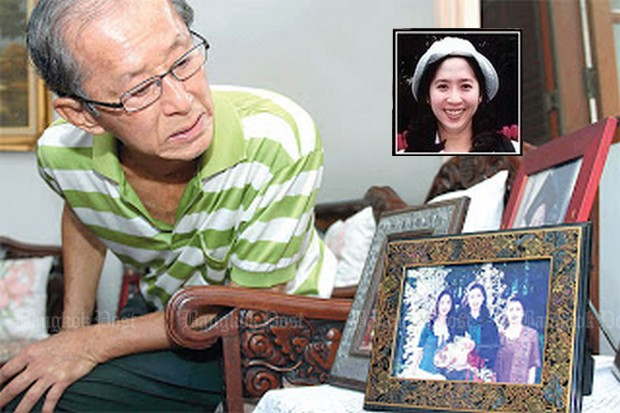 Orasri Liangthanasan (inset), then 26, was employed at the Windows on the World on the very top floor of the World Trade Center, and was preparing to open the restaurant when the hijacked planes hit the two main towers. Her father (above) and family commemorate her death each year. (Bangkok Post file photo)

The family of Orasri Liangthanasan went to a temple to remember her, as they do each year, and then to their private meditation house in Lampang to pray and make merit.

The family of Saranya Srinuan also marked her death at terrorist hands, in a private family ceremony. 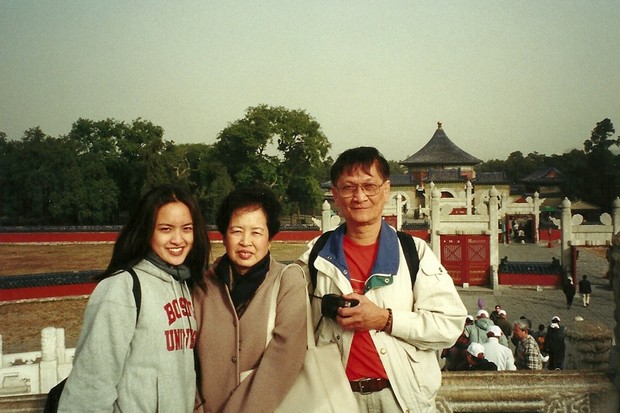 The mother and father of Saranya Srinuan (left), who was 23 when she died in the New York attacks have set up a memorial to remember her. Saranya had just graduated from Boston University with a Bachelor of Arts degree in International Relations, and arrived to her job at Cantor Fitzgerald at 7am on the 104th Floor at One World Trade Center on 9/11. (Photo via family)

"Our country came together that day. And it did not matter what colour you were, or where you were from," said a tearful Magaly Lemagne, who lost her brother, Port Authority of New York and New Jersey Police Officer David Lemagne. She implored people to "stop for a moment and remember all the people who gave their lives that day.

"Maybe then we can put away our disagreements and become one country again."

Some victims' family members said they couldn't believe 16 years had passed since a tragedy that "still feels like yesterday," as Corina La Touche put it while honouring her father, Jeffrey La Touche, at the ground zero gathering.

To others, it was an occasion to thank first responders and members of the military, to express concern for those affected by Hurricane Irma as it continued its destructive path as a tropical storm, or to plead for a return to the sense of unity they felt after the attacks.

Trump, a native New Yorker observing the anniversary for the first time as the nation's leader, said the nation grieves for the people "who were murdered by terrorists" 16 years ago.

Speaking at the Pentagon, the Republican president issued a warning to extremists, saying "America cannot be intimidated."

When America is united, "no force on earth can break us apart," he said.

At the Flight 93 National memorial, Vice President Mike Pence said the Flight 93 passengers who revolted against hijackers might well have saved his own life.

The Republican VP was a member of Congress on 9/11, and the Capitol was a possible target of the terrorist piloting Flight 93. Instead, it crashed near Shanksville after the passengers took action. Thirty-three passengers and seven crew members were killed.

The ceremony on the National Sept 11 Memorial plaza in New York strives to be apolitical: Politicians can attend, but since 2011, they haven't been allowed to read names or deliver remarks.

Yet last year's 15th-anniversary ceremony became entangled in the narrative of a fractious presidential campaign when Democratic nominee Hillary Clinton left abruptly, stumbled into a van and ultimately revealed she'd been diagnosed days earlier with pneumonia.

This year, the focus remained on the names read out beneath the waterfall pools and lines of trees.

Some name-readers gave updates on family graduations, marriages and births. Others remembered a loved one's flair for surfing or drawing on coffee-shop napkins. A few never even got to know the relatives they lost on Sept 11, 2001.

"I wish more than anything that I could have met you," Ruth Daly said, her voice breaking, after she read names in remembrance of her slain grandmother, Ruth Lapin. "I'm very proud to be your namesake. I hope you're watching down on me from heaven."

"It does feel good to know you have other people who are feeling the same pain that you're in," Marvaline Monroe said as she headed into the ceremony to remember her brother, Keith Broomfield. She comes to the ceremony as often as she can.

"It's very hard. We'll never forget, but we just have to live with the memories that we have of him."

Debra Epps said losing her brother, Christopher, left her with a mission: "I view each day as a day to do something different, so that my brother's life and all of the people who have lost their lives on this day will not be in vain."

Her brother stood against hatred, she said, and she believes "this world will make a change for the better."

Delaney Colaio read names in honour of the three relatives she lost: her father, Mark Joseph Colaio, and her uncles Stephen J Colaio and Thomas Pedicini. She is making a documentary about the children who lost parents in the attacks.

"I stand here as a reminder to the other families of 9/11 and to the world," she said, "that no matter how dark moments life can get, there is light ahead if you just choose hope."