Thailand and 49 other countries gathered at a conference room inside the United Nations headquarters in New York to sign the nuclear prohibition treaty on its first day. (EPA photo)

Thailand joining the Treaty on the Prohibition of Nuclear Weapons has been signed and ratified by Minister of Foreign Affairs Don Pramudwinai in New York.

The signing ceremony was held on Wednesday evening at UN Headquarters.

It was chaired by UN High Representative for Disarmament Affairs Izumi Nakamitsu.

The treaty will come into force 90 days after it has been ratified by at least 50 countries. In all, 50 countries signed the treaty on its first day.

In Bangkok, the government immediately ratified the treaty. Only two other countries did the same - Guyana and the Vatican.

Nuclear-armed states and most of their allies except the Netherlands stayed out of the negotiations. Holland was the only participating country to vote against it, and Singapore was the only country to abstain in the final vote.

Immediately following its adoption in July, the United States, Britain and France issued a joint press statement saying that they "have not taken part in the negotiation of the treaty… and do not intend to sign, ratify or ever become party to it."

It was first adopted at a UN conference on July 7 aimed at anti-proliferation.

The pact contains a range of prohibitions against nuclear weapon-related activities.

"The treaty is an important step toward the universally held goal of a world free of nuclear weapons," UN Secretary-General Antonio Guterres said.

North Korea's recent nuclear test is among the topics being discussed at the United Nations General Assembly from this Tuesday to Monday.

US President Donald Trump during his speech on the opening day lashed out at the country's missiles and nuclear tests and threatened to "totally destroy North Korea" if the US or its allies were seriously threatened.

Security Council members held urgent talks last Friday to address the North's provocations, which have stepped up in recent months.

North Korea launched a ballistic missile that flew over Japan on Sept 14, less than three weeks after it sent another missile over the same country on Aug 28.

In between those dates the reclusive regime tested an advanced nuclear device on Sept 3, leading the Security Council to unanimously adopt a resolution imposing stiffer sanctions against the country.

Below: Two anti-nuclear weapons campaigners unfurl a banner at the Australian foreign ministry in Canberra. No nuclear-armed country or its protected allies intends to sign the treaty. (AP photo) 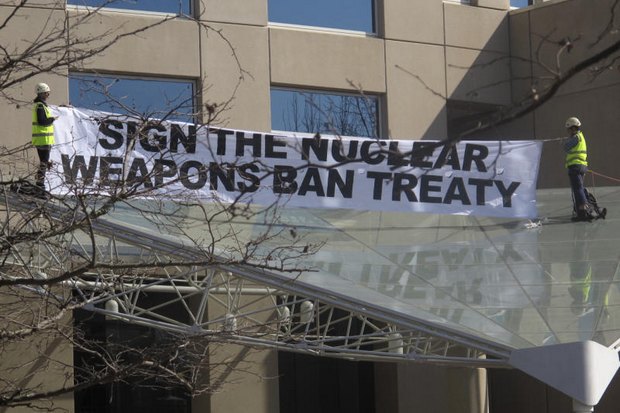