A Balinese man watches Mount Agung volcano almost covered with clouds as he stands at a temple in Karangasem, Bali, Indonesia, on Tuesday.,(AP Photo)

BALI: Indonesia's disaster agency says more than 75,000 people have fled from around Mount Agung volcano on the tourist island of Bali because of fears of an eruption.

The agency's spokesman, Sutopo Purwo Nugroho, said Tuesday that evacuees are spread across more than 370 locations on the island and their numbers are continuing to rise.

The volcano's alert status was raised to its highest level on Friday, with hundreds of tremors daily indicating magma is moving toward the surface and an eruption is possible.

Indonesian officials have imposed a 12km exclusion zone around the volcano, whose last eruption in 1963 killed over 1,000 people and destroyed several settlements.

Indonesian villagers who have fled Bali's Mount Agung volcano say they're resigned to their predicament and can only pray they're spared an eruption.

Farmer Kadek Karma, who left his village located some 6km from the volcano, said, “I still feel I want to go home because I've left my flowers and a chili crop that's almost already to harvest.”

The 31-year-old added, “I can only surrender to fate.”

Clouds shrouded the top of Bali's highest volcano on Tuesday as the risk of an imminent eruption began to persuade some tourists to have second thoughts about visiting Indonesia's paradise island.

Several countries, including Australia, Singapore, and the United States, have issued travel advisories alerting holidaymakers to the risk. And a hotel operator in Bali said news of the volcano had caused some guests to cancel their plans.

"Business is getting low since Mount Agung's alert status was raised to the highest level," said Ketut Purnawata, manager of Dasawana Resort, which is in the same district as the volcano, normally popular with tourists and hikers.

Nearly five million people visited Bali last year - most of them from mainly from Australia, China and Japan.

Airlines in Australia and Singapore said they were preparing for any possible disruptions due to an eruption, but flights were running normally for now.

Virgin Australia and Jetstar, both of which fly to Bali from Australia, said they would carry extra fuel in case they needed to reverse course quickly.

Jetstar and Singapore-based budget carrier Scoot said they had been contacted by a small number of customers looking to change their travel dates. "Less than 100 customers chose to rebook to a later date," a Scoot spokeswoman said.

Singapore Airlines and its short-haul arm SilkAir said customers travelling to Bali until Oct 2 could rebook or request a refund, while AirAsia said flights were operating normally.

Passengers spooked by news of the active volcano also took to Twitter to ask airlines about cancellation options, and several mentioned cancelling their plans altogether.

One Indonesian travel agency said it had seen some cancellations from domestic and international travellers.

"There will definitely be an impact on (sales of) tour packages but we don't know the figures yet," said Agustinus Pake Seko of PT Bayu Buana travel agency. 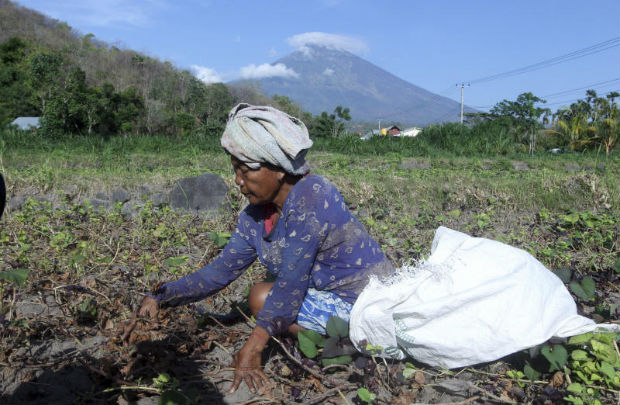 A woman works in a field with Mount Agung seen in the background in Amed, Bali, Indonesia, on Tuesday. (AP Photo)

For now, life was going along largely as normal on the island famous for its beaches, temples and gentle culture.

One Spanish tourist, Jordi Portalo, 23, said he was unperturbed by the rumbling volcano.

"I think it could happen but...maybe we'd have to stay here a couple more days, so nothing to worry about," he said sitting at a cafe next to a white-sand beach in the Nusa Dua area.

Sitting on the so-called Pacific Ring of Fire, Indonesia has nearly 130 active volcanoes, more than any other country. Many Indonesians live near volcanoes because lava flows can make the surrounding soil and land fertile for farming.

Ash clouds from volcanoes and eruptions have disrupted tourism in Bali and other parts of Indonesia in the past.

Hundreds of domestic and international flights were disrupted in 2016 when a volcano erupted on Bali's neighbouring Lombok island, sending up columns of ash and debris.

Fears of a volcanic eruption in Bali have escalated, with more people evacuated from the danger zone. @cunninghamscott #9News pic.twitter.com/fMIictBNaM