Prince Norodom Ranariddh gestures during an interview with Reuters at his home in central Phnom Penh, Cambodia on Saturday. (Reuters photo)

PHNOM PENH: With Cambodia's opposition warning of the imminent death of its democracy, the historic rival who once beat Prime Minister Hun Sen in an election said there was no option but to work with the strongman.

Seventy-three-year-old Prince Norodom Ranariddh, Hun Sen's opponent in UN-supervised elections in 1993, has horrified Cambodia's main opposition party with a call for it to be dissolved after its leader was charged with treason.

Ranariddh's career exemplifies not only the swings in Cambodian politics, but also the way Hun Sen, 65, has used force and cunning to neutralise enemies since defecting from the genocidal Khmer Rouge in the 1970s to help drive it from power.

"Samdech Hun Sen, you want or you don’t want, you like him or you don’t like him, he brings about this national unity," Ranariddh said, using the prime minister's formal title.

"According to the law you are not allowed to harm national unity," the white-haired Ranariddh told Reuters on Saturday. Beside him, four aides nodded and pressed together their palms in deferential emphasis.

Ranariddh's royalist Funcinpec party won no parliamentary seats in 2013 elections, but would be allocated most of those held by the Cambodia National Rescue Party (CNRP) if it is dissolved after the arrest of leader Kem Sokha last month.

Alongside the government, Funcinpec has sought a ban on the CNRP because of the arrest.

Kem Sokha and his party dismiss the charges against him as bogus and an attempt to extend Hun Sen's 32-year rule at the head of the Cambodian People's Party (CPP) amid the biggest crackdown on critics of the prime minister in years.

"The prince failed his people when he had the mandate to bring real peace," said Mu Sochua, a deputy to Kem Sokha who recently fled to exile in fear of arrest.

"Now, he is robbing his people of their right to choose the leader of their choice by collaborating with the CPP in the dissolution of the CNRP." 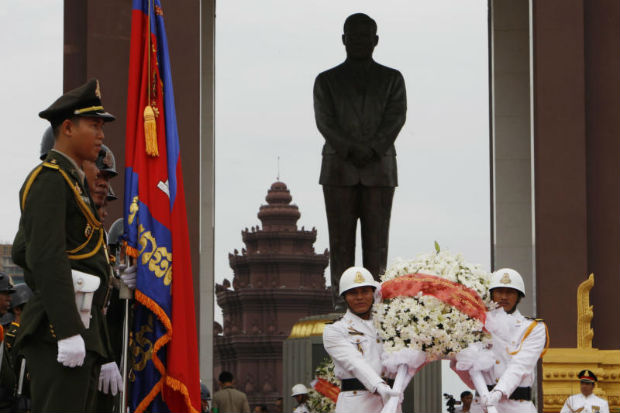 Honour guards stand near the statue of Cambodia's late King Norodom Sihanouk during a ceremony to mark the fifth anniversary of his death, in Phnom Penh, Cambodia, on Sunday. (AP photo)

Ranariddh was summoned to politics from his post as a French law lecturer by his wily father, the late King Norodom Sihanouk.

With royalist sentiment strong, Ranariddh beat Hun Sen in the 1993 election organised by the United Nations. But when Hun Sen threatened a return to war, Sihanouk did a deal that sidelined his son as a co-prime minister.

Ranariddh was driven into exile in 1997 after his forces were defeated by those of Hun Sen in bloody clashes in Phnom Penh.

After international pressure, Ranariddh was allowed to contest elections a year after, but never again came close to winning and entered on and off alliances with Hun Sen.

Splits in the party followed and after a spell overseas following accusations of financial scandal, Ranariddh returned in 2015. As he speaks, he switches between English and Khmer with a peppering of French.

Although the United States and other Western countries helped secure Ranariddh's return to Cambodia in the 1990s, he dismissed their criticism of Kem Sokha's arrest and calls on the government to stop moves to ban the CNRP.

"I, Norodom Ranariddh, would like them to leave us free to decide," he said.