Me Infinity sends Iceberg to Cambodia

Me Infinity is launching its foreign campaign from a Thai factory.

Supplement maker Me Infinity Thailand is betting its entry into the Cambodian market with an energy drink can double the company's revenue after a few lean years in the local market.

The company's revenue fell 50% from 2016 to 2017, down to 100 million baht, in large part because of the passing of the late King, said Salilaporn Kongthongmaneeroj, chief executive of Me Infinity Thailand.

Me Infinity, which plans to list on the MAI stock exchange within three years, benefited from the boom in the supplement industry Thailand experienced in 2013-15. In those two years, the market grew at a 30% rate, but has since slowed to 10-15%.

The company, which focuses on beauty and health products in the Thai market, will expand into the energy drink sector in Cambodia with its Iceberg energy drink, which falls somewhere between a more traditional health supplement (it includes ginseng and cordyceps extract) and a conventional energy drink.

The company hopes to take a 20% stake in the 58-billion-baht Cambodian energy drink market, dominated by Bacchus (produced by South Korea-based Dong-A Socio Group). Dong-A Socio holds approximately 60% of the Cambodian market, with upwards of 24 million cans sold per month.

Ms Salilaporn said Me Infinity has shipped 1 million cans of Iceberg to Cambodia since its introduction on Oct 29.

Assuming their 20% market share goal holds, she said Me Infinity will derive 50-60% of its revenue from the Cambodian market, where it currently sells no other products. The supplement company's annual revenue would double from 100 million in 2017 to 200 million next year.

In terms of marketing the company is shying away from the heavy promotion models favoured by local competitors. "Their [the competitor's] tactic is to give out gold chains," said Nathaphat Suwanno, managing director of Iceberg 888 Thailand.

"Promotions deplete profits, which are much higher in Cambodia than in Thailand because there is much less competition," said Ms Salilaporn. The decision to forgo promotions is also a strategic choice. Executives hope that consumers will place the drink on the same level as Bacchus, which does not usually run promotions.

A lot of drinks in the Cambodian market already contain ginseng, but no drink contains cordyceps extract, although Bacchus may move to include it in its Cambodian formulation soon, according to Mr Nathaphat. The drink will also contain about 50% less caffeine than its competitors, which Ms Salilaporn said is a draw for health-conscious consumers.

The drink will sell for 21.5 baht a can, the same as its Korean competitor, but lower than other Thai brands like M-150, which retails for close to 30 baht.

The group, known for its focus on social media marketing, will devote 3 million baht to marketing in Cambodia, part of which will be designated to hire three actors to appeal to different age segments across social media platforms. Marketing in Cambodia is cheap, the campaign will spend an average of 20,000 baht per minute, as opposed to over 200,000 in Thailand.

Asked why they chose to go enter the Cambodian market this year, Ms Salilaporn said it is a less competitive and more profitable market than Thailand's.

Energy drinks are a staple in Cambodia, where the average energy drink consumer drinks 2-3 cans per day. Demand is fuelled by a large population of day labourers, said Ms Salilaporn, but Me Infinity will target all segments of the population.

The company currently manufactures Iceberg through OEM Prima Beverage Co Ltd, under a licencing contract from Iceberg 888 Thailand Co Ltd, a subsidiary of Iceberg 888, a Chinese corporation that distributes alcoholic beverages in China.

If the initial Cambodian incursion goes as planned, Me Infinity will build a 150 million baht factory in Cambodia in the next six months to thicken its margins. "It will be a different story once we operate our own factory, which will be able to produce 1.5 million cans per day," said Mr Nathaphat.

China is next on the list as a market where Me Infinity can leverage its relationship with Iceberg 888, but which presents its own challenges. Indonesia would come after, but the executives are still discussing whether further expansion will be fuelled by their own cash reserves, or whether they will look for outside funding.

"We are discussing a deal to export 20 million cans in 2018, and 40 million the year after," said Ms Salilaporn. The Chinese market, already saturated with natural medicine and tea, may not be fertile ground for foreign supplements, but there is opportunity in the energy drink sector.

The company would seek to stock Chinese shelves with slightly different packaging for Iceberg. "One of our main selling points is that it is made in Thailand," said Ms Salilaporn, which means the company the products destined for China will need to be produced in Thailand, even after building a factory in Cambodia. 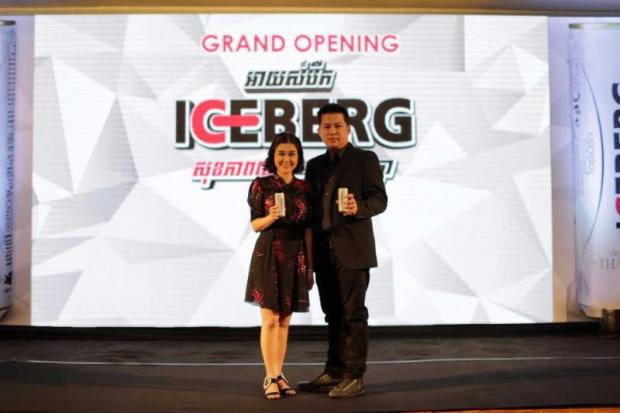 Ms Salilaporn and Mr Nathaphat are seeking to make gains in Cambodia, calling it a less competitive and more profitable market than Thailand.