BALUKHALI, Bangladesh: Rohingya Muslims who fled a village where Myanmar has admitted its forces helped massacre 10 people said Thursday the victims were all civilians, not fighters as asserted by the army.

The Myanmar army chief's office confirmed Wednesday that security forces took part in killing "Bengali terrorists" on Sept 2 in the village of Inn Din in Rakhine state, using a pejorative term for Rohingya.

It was the first time Myanmar had admitted abuses during an army-led crackdown on Rohingya militants from late August that sparked a mass exodus of the Muslim minority.

But displaced Rohingya inside Bangladesh have angrily denied the army's account, with survivors who fled Inn Din insisting those killed were not militants but civilians murdered in cold blood.

Inn Din villager Wal Marjan, 30, said they were attacked by Buddhist mobs flanked by soldiers, who later "selected 10 to 15 men to attend a meeting".

They were never seen again, said Marjan, who was later told by another man that her husband and the others were slaughtered.

"He said his body was thrown into a mass grave with the other men," Marjan told a reporter at a refugee camp in southeast Bangladesh, adding her husband had no connections with Rohingya rebels.

#Myanmar's army has admitted for the first time its soldiers were involved in the killing of #Rohingya Muslims in recent violence in #Rakhine state. pic.twitter.com/bsGvCcNwwB

Meanwhile, the US ambassador to Myanmar described the army's statement on the massacre as "an important step".

The US hopes it will be followed by more transparency and accountability, said Ambassador, Scot Marciel said during a forum on media freedom with journalism students and reporters in Yangon.

"We hope it is followed up by more transparency and by holding those responsible accountable. I would stress this should be done, not as a favour to the international community, but because it's good for the health of Myanmar's democracy."

The United States has previously said the sweeping military counteroffensive amounted to "ethnic cleansing". Myanmar denies that, saying its forces were carrying out legitimate "clearance operations" against insurgents.

The European Union and representatives of Muslim nations renewed calls for a broader international investigation into violence in the western state of Rakhine, after the military said on Wednesday its soldiers had killed 10 captured Rohingya Muslim "terrorists" at the beginning of September.

But the villagers' interviews indicated that the army account of the massacre is deeply flawed and defensive, rather than an admission of misconduct.

In its account of the massacre the army chief's office said security forces captured 10 Rohingya militants before killing them as violence engulfed the village and its surrounding area. 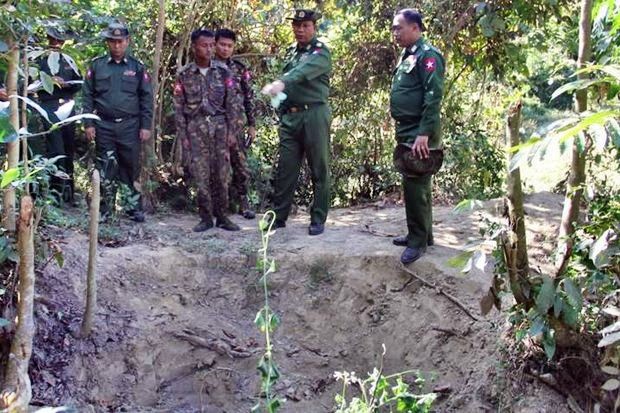 The post on Facebook also gave the first confirmation of a mass Rohingya grave inside Rakhine state.

Hossain Ahammad said the slain men were all simple workers.

"They were not part of any movement. They are simply victims of the Burmese army's wrath," he said.

Refugees who have fled in their hundreds of thousands to Bangladesh have given consistent accounts of massacres, rape and torture by Myanmar security forces flanked by ethnic Rakhine mobs.

Those allegations, which have been cross-checked by media and rights groups, have seen Myanmar accused of ethnic cleansing by the US and UN and prompted questions over whether the crackdown may have amounted to genocide.

Until Wednesday, Myanmar army has vigorously denied any abuses, instead locking down access to Rakhine state and accusing critics -- including the UN -- of pro-Rohingya bias and spreading "fake news".

The army chief's office said "action" would be taken against villagers and security members involved in the violence at Inn Din.

Last month Doctors Without Borders said at least 6,700 Rohingya were killed in the first month of the army crackdown on rebels in Rakhine -- the highest estimated death toll yet of violence that erupted on Aug 25.