ROME - Italy is used to living with political uncertainty thanks to the more than 60 governments it has piled through since the republic was established after the Second World War.

The country heads to the polls on Sunday to elect its representatives in the lower house Chamber of Deputies and upper house Senate.

But with a fragmented political landscape and a complicated new electoral law in place that mixes proportional representation with first-past-the-post, the country could wake up on Monday to any one of a variety of scenarios.

"It is unlikely that any of the three main contenders will be able to obtain a majority, but there is only one that can, and it's the right," said Roberto D'Alimonte, Director of the Political Science Department of Rome's Luiss University.

The right-wing coalition brings together four parties, the biggest of which are Silvio Berlusconi's centre-right Forza Italia (Go Italy) and the far-right League headed up by Matteo Salvini.

An agreement between Berlusconi and Salvini says that whoever comes first of the two parties will lead the government, should the coalition win a majority.

Banned from public office thanks to a tax fraud investigation, Berlusconi has said that if the coalition win a majority and his party comes first he would like to see European Parliament President Antonio Tajani, his former protege, lead the government.

If the League comes out on top, Salvini will be premier, assuming that Berlusconi keeps his word and lines up behind him. 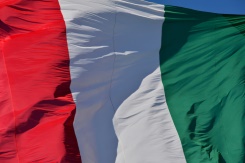 Brussels is betting on a German-style grand coalition between Forza Italia and the centre-left Democratic Party, both pro-EU parties.

Neither Berlusconi nor Democratic Party leader Matteo Renzi have dared suggest that they might enter into such an agreement during the campaign, but it is exactly what happened after the last general election in 2013.

However, there is no guarantee that the two parties and their Europhile allies -- perhaps even boosted by defectors from the League who have little taste for their party's recent nationalist rebrand -- will obtain enough votes to gain a majority in the upper and lower houses.

Another hypothesis, and one denied even more vigorously, is a eurosceptic alliance between the League and anti-establishment Five Star Movement.

But that partnership would also not be guaranteed to pick up enough votes and would be subject to fierce internal opposition from within both parties.

It would also run counter to the conciliatory tone recently offered towards the EU by Five Star Movement leader Luigi Di Maio, a shift from the instinctive Euroscepticism of party founder Beppe Grillo.

The last available polls from mid-February gave the right-wing coalition 37 percent of voting intentions, of which 17 percent for Forza Italia and 13 percent for the League.

The Five Star Movement was predicted to get 28 percent, followed by 27 percent for the centre-left coalition led by the Democratic Party, but with millions still undecided.

If there is no new majority in parliament, Paolo Gentiloni of the Democratic Party would remain as prime minister.

In the meantime President Sergio Mattarella will consult the various parliamentary groups to see if there is a figure who can command a majority, and if not, new elections could be called.

Regardless of the outcome, the procedure will take time. The two chambers will meet for the first time on March 23 to form groups and elect speakers for both the Chamber of Deputies and Senate.