LONDON: Jurors in the trial of a teenager accused of an attempted London Underground bombing on Monday heard that he had said it was his "duty to hate Britain" well before the botched attack in September. 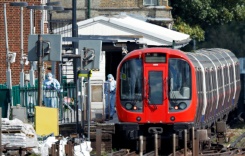 Ahmed Hassan has denied the charge of attempted murder and causing an explosion on a packed train on Sept 15.

Ahmed Hassan, an 18-year-old Iraqi asylum seeker, arrived in Britain in October 2015, two years before he allegedly left a bucket of explosives that partially exploded on a Tube train at Parsons Green station, injuring 30 people.

Katie Cable, a lecturer and mentor at a suburban college where Hassan studied media, told London's Old Bailey court that he had said he blamed Britain for the death of his parents in Iraq.

"It's my duty to hate Britain," she said he had told her.

Cable testified that she believed his father was blown up and his mother had been shot.

When Hassan came to Britain, he told authorities he was in fear of the Islamic State group and that it had taken him by force and trained him "how to kill" when he was in Iraq.

But the court also heard that the lecturer had even alerted a government terrorism prevention scheme of her concerns after she saw a message in August 2016 on his phone reading: "IS has accepted your donation".

Cable testified that Hassan talked about Tony Blair and expressed "anger" at events in Iraq, telling her "the British" were responsible for his parents' death.

Hassan has denied the charge of attempted murder and causing an explosion on a packed train on September 15.

The attack, claimed by IS, was the fifth time Britain had been targeted in a six-month period.

The Central Administrative Court has rejected a State Railway of Thailand bid to nullify a huge compensation order in the "Hopewell Project".

The Department of Disease Control has begun urgently investigating whether a French woman patient who tested positive for Covid-19 was allowed to pass on the infection to two others staying in the same quarantine facility as her.

Prime Minister Prayut Chan-o-cha will on Tuesday preside over the signing of a key contract worth 50.6 billion baht on the Thai-Chinese high-speed rail project, said deputy government spokesperson Traisuree Taisaranakul.

Biden heads for Georgia, Trump the Midwest as US election enters final week