WASHINGTON - Donald Trump has hailed the firing of a senior FBI agent as a "great day for democracy," a move his attorney said he hoped would bring an end to a probe into alleged collusion between the president's campaign and Russia. 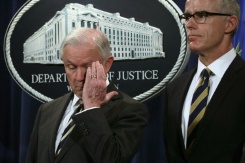 But critics slammed the axing as a "dangerous" ploy to discredit the top law enforcement agency as well as the work of Robert Mueller, the special counsel investigating Russian influence in the 2016 election.

McCabe, who was the FBI's deputy under former director James Comey, sacked by Trump last year, is potentially a key witness in that probe.

Trump's personal attorney, John Dowd, told the Daily Beast on Saturday that he hoped Deputy Attorney General Rod Rosenstein would follow the lead of the FBI Office of Professional Responsibility and "bring an end to alleged Russia Collusion investigation manufactured by McCabe's boss James Comey based upon a fraudulent and corrupt Dossier."

McCabe, who has endured a year of withering attacks from the president, was fired by the Justice Department late Friday, just two days before he was to retire after 21 years with the FBI.

The firing threw new fuel on the fire raging over the investigation, with critics saying Trump might be planning to engineer Mueller's dismissal, potentially sparking a constitutional crisis.

Mueller is also examining whether Trump might have obstructed justice, including through his firing last May of Comey.

"Andrew McCabe FIRED, a great day for the hard working men and women of the FBI - A great day for Democracy," Trump tweeted soon after the firing.

"Sanctimonious James Comey was his boss and made McCabe look like a choirboy. He knew all about the lies and corruption going on at the highest levels of the FBI!" Trump wrote.

McCabe pushed back hard, denying any impropriety and saying he was the victim of a Trump administration "war" against the FBI and the special counsel.

The move could add to discontent inside the FBI, where Comey and McCabe are widely respected.

The Justice Department said an internal investigation had found that McCabe made unauthorized disclosures to the media, and had not been fully honest "on multiple occasions" with the department's inspector general.

"The FBI expects every employee to adhere to the highest standards of honesty, integrity and accountability," Attorney General Jeff Sessions said in a statement.

Lack of candor under oath is a firing offense at the FBI, but the politically charged context of the move raised serious questions among McCabe's backers.

In a stinging response to the president, former CIA chief John Brennan tweeted Saturday: "When the full extent of your venality, moral turpitude and political corruption becomes known, you will take your rightful place as a disgraced demagogue in the dustbin of history."

Details of the inspector general's probe were not made public, but it involved the FBI's handling of the 2016 investigation into Trump's election rival, Democrat Hillary Clinton.

Trump has repeatedly accused McCabe and Comey of having protected Clinton from prosecution, including over her misuse of a private email server while she was secretary of state.

McCabe hit out following his sacking in a blistering statement.

He said the inspector general's probe "became part of an unprecedented effort by the administration, driven by the president himself, to remove me from my position, destroy my reputation, and possibly strip me of a pension that I worked 21 years to earn."

"It is part of this administration's ongoing war with the FBI and the efforts of the special counsel investigation."

But one law professor defended the Justice Department's investigators.

"These are not political appointees," Jonathan Turley of George Washington University told CNN.

"They clearly concluded that McCabe misled them - and that he misled them on one of the core issues they were investigating."

The firing came as the White House shows increasing frustration with the continuing collusion probe, which is focusing increasingly on the president's inner circle.