This image released by CBS News shows Stormy Daniels, left, during an interview with Anderson Cooper which aired on Sunday on "60 Minutes". (CBS News/60 Minutes via AP)

Daniels told Anderson Cooper on CBS's 60 Minutes programme that she had unprotected sex with Trump once in 2006, and was threatened by a man in a parking lot in Las Vegas when she agreed to tell her story in 2011. 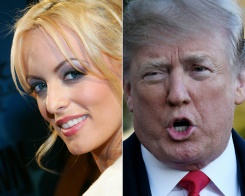 She is seeking to be released from a non-disclosure agreement she signed shortly before the 2016 presidential election that brought Trump to power, for which she was paid $130,000 -- leading to allegations that the payment amounted to an illicit contribution to Trump's campaign.

When asked by Cooper if she had sex with Trump, Daniels responded: "Yes".

She was not attracted to Trump and did not want to have sex with him, but: "I didn't say no. I'm not a victim," Daniels said, according to an advance transcript of the interview.

She said she stayed in contact with Trump after the encounter because "I thought of it as a business deal," as the tycoon had said he would try to get her on "The Apprentice," the reality TV show he hosted at the time.

.@realDonaldTrump attorney Charles Harder sent a letter asking #60Minutes to read one of statements Stormy Daniels signed in January. “My involvement with Donald Trump was limited to a few public appearances and nothing more.” What about this Stormy? pic.twitter.com/diSU457Lqq

At the time, Trump did not ask her not to reveal the encounter, but that changed when she agreed to tell her story to a magazine for $15,000 in 2011, Daniels said.

"I was in a parking lot, going to a fitness class with my infant daughter. T-- taking, you know, the seats facing backwards in the backseat, diaper bag, you know, gettin' all the stuff out," she said.

"And a guy walked up on me and said to me, 'Leave Trump alone. Forget the story.' And then he leaned around and looked at my daughter and said, 'That's a beautiful little girl. It'd be a shame if something happened to her mom,'" Daniels said.

The experience left her shaking in fear and afraid she would drop her daughter, she added.

Cooper asked: "You took it as a direct threat?"

Daniels said that fear also motivated her to sign the non-disclosure agreement 11 days before the election in 2016.

"The story was coming out again. I was concerned for my family and their safety," she said.

On 60 Minutes, Stormy Daniels reveals the secret to getting trump to STOP talking about himself...

Turn him around, drop his pants, and spank him with a magazine featuring himself. #60Minutes#StormyDaniels pic.twitter.com/C45yAlKDts

On her motives for speaking out now, Daniels said she did not see herself as a victim or a part of the "Me Too" movement but simply wanted to set the record straight.

"I'm not okay with being made out to be a liar," she insisted.

Asked what she would say to Trump if he were watching the interview, she said: "He knows I'm telling the truth."

The White House has denied any sexual encounter between Trump and Daniels.

Daniels did not, however, discuss evidence to back her encounter with Trump, the possibility of which was teased by her lawyer prior to the interview.

Michael Avenatti posted a picture on Twitter of a computer disc along with the text: "If 'a picture is worth a thousand words,' how many words is this worth????? #60minutes #pleasedenyit."

The lawyer representing adult film actress Stormy Daniels says he sent a "warning shot" to President Trump.@MichaelAvenatti tweeted an image of a CD/DVD disc, with the caption: "If a picture is worth a thousand words, how many words is this worth?" https://t.co/KDYCrblYeH pic.twitter.com/aWe8yCnPPI

Avenatti filed a lawsuit on behalf of Daniels -- whose real name is Stephanie Clifford -- earlier this month seeking to toss out the confidential settlement, under which she was paid by Trump's personal lawyer, Michael Cohen.

Cohen claimed that Daniels is liable for at least $20 million for violating the agreement -- $1 million for each time she did so, in a court filing made prior to the CBS interview.