YANGON - Leeds United will play two friendlies in Myanmar next month as the Championship side looks to build a fanbase in the troubled Southeast Asian country. 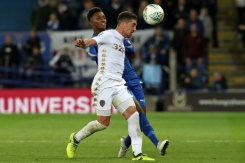 The tour, which will also see Leeds hold football clinics and PR visits to landmarks including Rangoon's Shwedagon pagoda, is likely to stir some controversy.

Myanmar is in the eye of a storm of criticism over its treatment of its Rohingya Muslim minority, around 700,000 of whom have been driven into Bangladesh since August last year in what the UN says amounts to "ethnic cleansing".

But that has not deterred the end-of-season tour by the famed Yorkshire club, who are currently mid-table in English football's second tier.

In a statement the club said it will play a Myanmar All-Star IX on May 9 in Rangoon, then a game against the national team two days later in Mandalay.

"Myanmar is one of the fastest growing nations in Southeast Asia and is passionate about English football," Managing Director Angus Kinnear said in a statement published on the club website on Tuesday.

"This tour gives us an opportunity to meet new fans of football who will hopefully support our journey back to the Premier League in the coming years."

Leeds were relegated from the English Premier League in 2004 and suffered years of financial woes.

The club has since struggled to gain promotion back to the top flight.