File photo: A Call for Animal Rights Thailand group rallies at Dusit Zoo, calling for a removal of elephant shows from the zoo after complaints over animal cruelty, on May 6, 2013. (Bangkok Post photo)

The next time you want to take a selfie with a tiger, ride an elephant or swim with dolphins, stop to consider the consequences.

That's what animal welfare groups have been saying for a long time. Now, more and more tour operators, online travel agencies and social media sites are starting to listen.

Wildlife tourist attractions account for 20 to 40% of global tourism, which produces more than $1 trillion a year, according to a report from PLOS One, a peer-reviewed scientific journal.

But advocacy groups say many animals-especially endangered species--end up being exploited to entertain their guests.

"Well-meaning people are often duped by 'wildlife' attractions, unaware of the cruelty that animals endure in captivity," says Ben Williamson, senior international media director at People for the Ethical Treatment of Animals (PETA). Williamson advises travellers to steer clear of any venue that lets you "ride, hug, or take a selfie with an elephant, tiger, dolphin, or other wild animal."

There is still disagreement around the world about engaging in certain wildlife tourist activities. For instance, elephant rides continue to be offered in Thailand, India and many other countries.

But in the USA, online travel agencies TripAdvisor and Expedia no longer sell experiences that involve the unethical treatment of animals. Instagram late last year started flagging particular wildlife-related hashtags and notifying users of the abuse some animals experience when being posed for photos. Other travel companies such as Trafalgar and Worldwide Expeditions have also altered their policies.

Earlier this week, the company revised its policy to include a ban on certain types of animal shows that it considers demeaning to animals, such as dressing up orangutans as boxers in Asia.

"There isn't really a universally agreed to criteria on what's on the right side or wrong side of the line," says James Kay, associate director of TripAdvisor. "We needed to say where we stood and where the line was for us."

The line for Williamson is clear. He recommends that people be cautious of animal mistreatment when considering camel rides at the Pyramids of Giza in Egypt, donkey rides at Blackpool beach in the United Kingdom, and horse rides at Taal Volcano in the Philippines, to name a few. Sometimes the animals are not given enough food or water, or suffer other forms of physical abuse.

Even zoos and circuses have come under fire for the way they handle animals. In 2016, SeaWorld ended its orca, or killer whale, breeding program. That same year, Ringling Brothers stopped parading elephants and sent them to a Florida conservation centre. 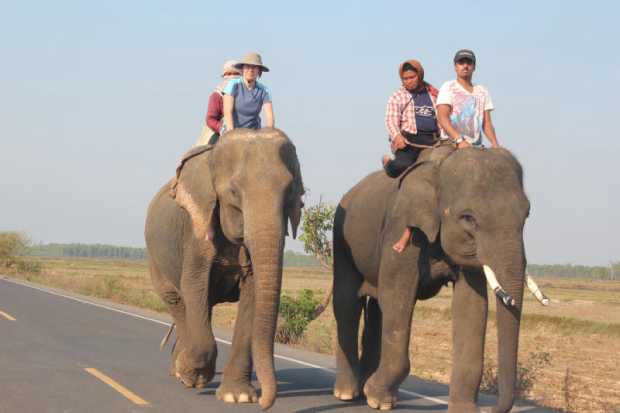 The treatment of elephants, in particular, has disturbed the animal welfare community. A World Animal Protection report last year found that more than ¾ of nearly 3,000 elephants used for entertainment in Asia are kept in cruel conditions.

Many elephants at tourist attractions were typically kept chained day and night. They had poor diets and got limited veterinary care, the report found.

The problem has become more visible in the digital age. Taking a selfie is often considered innocuous, but for many animals, it can cause stress and suffering, according to another World Animal Protection report. The animals are often beaten, taken away from their mothers and kept in dirty environments, the report said. There is also an illegal trade involving poachers going into the wilderness to capture exotic or endangered animals.

Elizabeth Hogan, campaign manager for oceans and wildlife at World Animal Protection, advises that travellers think about the circumstances that led to the animal ending up in a photo op.

"This is a wild animal," she says. "Your actions, your desire for that photo, that selfie means that animal is not engaging in its natural behaviour. If you're holding a two week-old tiger cub and feeding it with a bottle, where is that animal's mother?"

Instagram revised its policy last year after a World Animal Protection report found that there was a 292% increase in the number of wildlife selfies posted on Instagram between 2014 and last year. More than 40% of those were "bad" selfies, showing someone hugging, holding or inappropriately interacting with a wildlife animal.

That's not to say that all wildlife tourism outside of wild lands is bad. There are plenty of wildlife sanctuaries around the world that let animals live as naturally as possible without physically encountering visitors.

While not all zoos and aquariums are accredited, those in the USA and across the world that earn it have to undergo rigorous standards. In the USA, the Association of Zoos and Aquariums requires the facilities to participate in conservation and research activities. The American Humane Association also sends independent audit teams into zoos and aquariums.

Christopher Dold, chief zoological officer at SeaWorld Parks and Entertainment, says the the mission of any zoo or aquarium is to expose people to animals they have never seen before as a way to make them care enough to want to keep that species alive.

"Those opportunities are critically important for conservation," Dold says. "Can we engage as much of the public, as much of a society to care for and understand and know about these animals as much as possible?"

Still it's hard for a traveller to discern what is the right thing to do when it comes to wildlife when tour companies around are still offering excursions such as swimming with dolphins.

Williamson, of PETA, says the best way to take the guesswork out of planning is to book your trip through an agency that specialises in animal-friendly travel, such as Humane Travel.

Many of the travel companies that have adopted new animal welfare procedures also have educational components to them. Activities that involve any animals on TripAdvisor and Viator have paw print icons affixed next to them that send users to an education portal.

The portal includes articles from the dozen or so animal advocacy groups TripAdvisor consulted with when first introducing its new policy. They include Global Wildlife Conservation, the Association of Zoos and Aquariums, Oxford University WILDCRU, Think Elephants, and Sustainable Travel International.

"Where we can have the greatest impact is having consumers as informed as possible and having them making ethical choices they are comfortable with," Kay says.