Visitors at a motor show. Research firm LMC reported light vehicle sales across the region rose by 3% to 829,307 units in the first quarter. PATIPAT JANTHONG

Light vehicle sales in Asean are expected to show healthy growth this year, led by a rosier outlook for Thailand, but there are gloomier prospects for other key markets, according to research firm LMC Automotive.

LMC reported sales across the region rose by 3% to 829,307 units in the first quarter, counting only passenger cars and light commercial vehicles, albeit with mixed results across the five regional markets.

Thailand and Vietnam both posted strong double-digit growth, while sales in Indonesia, Malaysia and the Philippines remained cloudy.

Indonesia, the region's largest vehicle market, saw a 1% increase to 267,828 units, but sales began to fade in February.

The robust sales in Thailand were supported by two key factors. First, strong replacement demand following the expiry of the five-year resale ban under the first-time buyer scheme introduced in 2012-2013.

Those who took advantage of the temporary tax rebate 5-6 years ago are free to trade their vehicles in for new ones.

"These factors led us to revise our 2018 Thai sales forecast upward by around 5% compared with our previous report," said the LMC. "We forecast full-year sales of 937,000 units."

The Vietnamese economy remains robust, which, in turn, supports car sales. That said, the completely built-up (CBU) import market suffered in the first quarter from the implementation of the new non-tariff barrier (Decree 116).

The lack of clarity that ensued from this new regulation saw sales in the sector nosedive by 88% year-on-year in the quarter, versus a growth of 41% year-on-year for locally-produced models.

In March, however, automakers in Thailand and Indonesia -- the main sources of CBU imports -- resumed exports to Vietnam as they were able to provide the Vehicle Type Approval certificates required under Decree 116. Although sales in the month were weaker than expected, the resumption of imports points to a rebound in the months ahead.

"Based on these changes, we cut our full-year 2018 Vietnamese car sales forecast slightly to a total of 308,000 units," said the LMC.

For Indonesia, LMC has cut a projection for full-year 2018 sales of 1.04 million units, led by the decline in passenger car demand in the first quarter and the overall outlook in that country.

The Indonesian market inched up by 1% in the first quarter, but a strong increase in January (+9%) offset a decline in February-March (-3%). The decline in the second and third months can be accounted for by a drop in the passenger car demand (-5%), from a robust January result (+6%).

The segment was impacted by stricter auto loan conditions and pressure on consumer purchasing power from the depreciating Indonesian rupiah and accelerating inflation.

In contrast, light commercial vehicles rose by a healthy 13% year-on-year in the first quarter, reflecting rising public infrastructure spending ahead of the major elections in 2019. 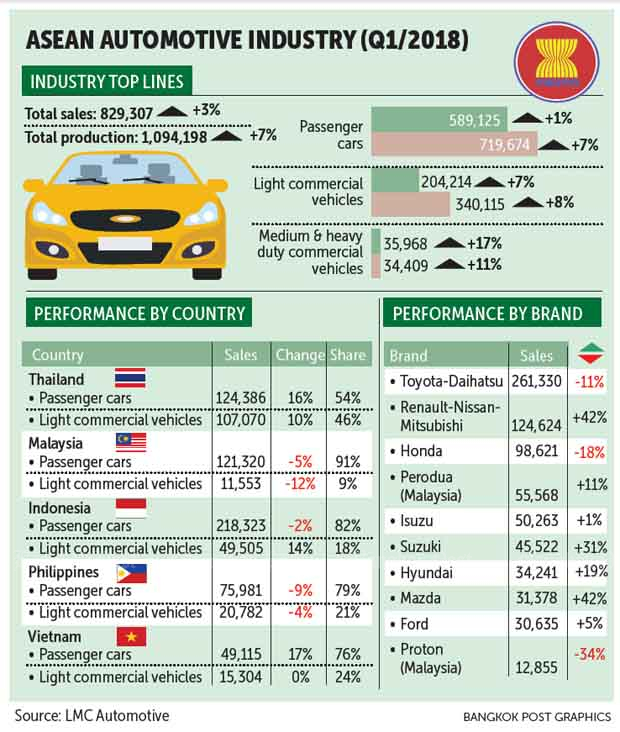 This slowdown reflects the country's more stringent auto loan conditions and the likelihood that consumers held off on purchases ahead of the general election in early May.

Following the surprise election of Dr Mahathir as Malaysia's new Prime Minister, this wait-and-see approach is likely to continue until the newly formed government implements policies, specifically in relation to the new tax structure and fuel subsidies.

In the Philippines, LMC cut the 2018 sales forecast to a total of 432,000 units because the demand in the first quarter declined per its expectations (-8%), as the implementation of the new excise tax hike on early January pulled demand ahead to the end of last year.

However, the March result was even weaker than projected. For the remaining quarters of 2018, several negative headwinds are picking up speed, most notably the sharp depreciation of the Philippine peso and rising inflation.

Climate: Removing CO2 from the air no longer optional