LIMA: Peru's congress suspended lawmaker Kenji Fujimori late Wednesday over corruption allegations but lacked a quorum to dismiss him as part of a fight with his sister for control of their father's political dynasty. 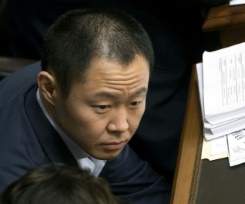 Peruvian lawmaker Kenji Fujimori, the youngest son of pardoned former president Alberto Fujimori, attends the debate in Congress on whether to dismiss him from office on corruption charges -- he could be banned from running for office

After 11 hours of debate in a special plenary session, 61 lawmakers voted to suspend the youngest son of former president Alberto Fujimori.

But many lawmakers then walked out and the speaker of the chamber, Luis Galarreta, suspended the session citing a lack of quorum -- 67 lawmakers -- before it could vote on a motion to dismiss Fujimori altogether as sought by the party of his sister and rival, Keiko Fujimori.

"I say this to my sister: 'here, you have my head,'" Kenji Fujimori said after the vote. "We are victims of a parliamentary dictatorship."

Fujimori, 38, is accused of attempting to buy votes to keep disgraced former president Pedro Pablo Kuczynski from being impeached. Kuczynski ended up resigning, in March.

With Fujimori now out of congress and under investigation, the vote Wednesday night shapes up as a win, albeit a costly one, for his sister in their battle for control of their father Alberto's political legacy.

But the younger Mr. Fujimori is not disqualified from politics altogether and he and his sister could even square off against each other in presidential voting in 2021.

After the vote to suspend him, half of the lawmakers in the chamber walked out, leaving only supporters of his sister. That meant there was no quorum to vote on sacking Fujimori altogether.

"If anyone believes that my political life ends here, they are totally wrong, because this is just a beginning," Fujimori said before the vote, shedding a few tears.

Many see Kenji, who polled more votes than any other candidate in Peru's last two legislative elections, as likely to run against his sister for the presidency in 2021.

The drive to ban Fujimori from politics was in fact aimed at keeping him out of that presidential race, analyst Fernando Tuesta told AFP.

Corruption-tainted Kuczynski survived an impeachment vote in Congress last December thanks to the abstentions of Kenji Fujimori and his supporters, who broke ranks with his sister's Fuerza Popular (Popular Force) party.

In what was seen as a blatant quid pro quo, Alberto Fujimori was pardoned by Kuczynski just days later and released from prison, where he was serving a 25-year term for human rights abuses committed during his decade in power (1990-2000).

The 79-year-old Kuczynski finally stepped down in March on the eve of a second impeachment vote.

Two congressional allies of Kenji, Bienvenido Ramirez and Guillermo Bocangel, were accused of the same charges and were also suspended Wednesday night.

Since leaving prison in December, the ailing Fujimori has been unable to mend fences between his children.

With timing worthy of a TV soap opera, Peruvian media reported Wednesday than the Inter-American Court of Human Rights, which sits in Costa Rica, was to announce a verdict within hours on an appeal against his pardon.

Keiko, 43, had opposed seeking a pardon for her father, saying that he was innocent and should be released without government mediation.

Her critics say the real reason was that, once liberated, her father would threaten her control of the party that has come to define what Peruvians call Fujimorism.

"Keiko could score a double triumph, if the court sends her father back to prison while she sends her brother onto the street," wrote analyst Rosa Maria Palacios in La Republica newspaper.

Keiko seems to hold all the cards in her face-off with her brother. She heads her own party going into the presidential elections, and has the experience of two presidential campaigns behind her.

But with the suspension rather than outright dismissal, her brother is still a force to be reckoned with.

Canada hospitals use drones to carry lungs for transplant