Kim-Trump summit: Where does it leave the main players?
World

Kim-Trump summit: Where does it leave the main players?

SINGAPORE: Donald Trump's groundbreaking meeting with Kim Jong Un, the hereditary leader of a dynastic dictatorship, was heralded by the main players as a breakthrough that will bring about major change, but left others wondering: What now? 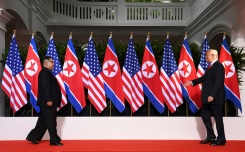 After decades of isolation over its nuclear and missile programmes, the regime -- decried for human rights abuses at home and its destabilising threats of war -- received a warm embrace from the US president, who welcomed an agreement on the "complete denuclearisation" of the Korean peninsula, even as critics suggested the document was short on details.

Beyond the tub-thumping soundbites of the Singapore summit, the unprecedented get-together left many questions unanswered and some US allies in the region facing an uncertain future.

Here is a look at where the main players stand, and what may lie ahead.

Any reduction in tensions on its doorstep is welcome for China, North Korea's closest ally, which accounts for around 90 percent of Pyongyang's trade. Beijing lost little time in declaring that Singapore forged a "new history".

Trump's shock announcement of a stop to war games with Seoul will have come as an added bonus as Beijing has always eyed the military exercises in its backyard warily.

In another political win for President Xi Jinping, the declaration was effectively a tacit acceptance of the "freeze for freeze" proposal pushed by Beijing -- a halt to both US-South Korea joint drills and the North's weapons tests.

Xi met twice with Kim before Singapore and retains a strong influence on the situation -- China even lent Kim a plane to get to the summit.

Beijing immediately hinted that the United Nations could consider lifting the punishing sanctions on North Korea that Trump credits with bringing Kim to the table.

South Korea's President Moon Jae-in played a critical part in bringing about the Singapore summit, patching things up when the meeting threatened to founder amid a return to mutual mudslinging.

Seoul and Pyongyang have already vowed to hold more regular meetings and the legitimisation of Kim on the world stage makes a Moon trip to Pyongyang more likely.

North and South are also likely to renew their push towards a declaration that the 1950-53 Korean war is over, after fighting stopped in an armistice rather than a peace treaty.

But like everyone else, military chiefs in South Korea were caught off-guard by Trump's unilateral declaration of an end to joint exercises, which is likely to embolden conservatives calling for Seoul to develop nuclear weapons of its own.

The welcome from Japan was conspicuously less effusive than from other countries, with Tokyo under direct threat from North Korean missiles and reliant on the US for its defence.

The cancellation of the war games seemed to grate in Tokyo, with Japanese Defence Minister Itsunori Onodera stressing they were "vital" for regional security.

On the huge domestic issue of Japanese citizens kidnapped by North Korea decades ago, Prime Minister Shinzo Abe welcomed that Trump had apparently brought it up with Kim, but there was no tangible progress.

Going forward, officials in Tokyo are reportedly seeking an Abe-Kim summit to thrash out the issue head-to-head.

Given the broad scope of the eventual declaration -- which critics say made little actual progress towards denuclearisation -- officials from the United States and North Korea face a long and rocky road of negotiation.

Trump said top officials including hawkish National Security Advisor John Bolton would next week be "going over the details to get this stuff done".

According to the North's official KCNA news agency, the two leaders accepted invitations to visit each other's countries, so more "historic" summits could also be in the offing.

The Russian press is calling the Singapore summit a "PR success" & "victory" for Kim Jong-un. One paper warns that Trump's "exaggerated self-belief in his powers of negotiation" puts the US president "at risk of manipulation by his negotiating partners." pic.twitter.com/gTBzwUkm6L