WASHINGTON: President Donald Trump renewed his attacks on Harley-Davidson on Tuesday, threatening to tax the company for offshoring manufacturing and saying the iconic American motorcycles should "never" be built outside the United States.

One day after the Wisconsin-based company said it was planning to shift some manufacturing overseas due to the European Union's tariffs in retaliation for US duties, Trump accused Harley-Davidson of appropriating the trade war as an "excuse" for the move.

EU officials, meanwhile, suggested Trump had only himself to blame for the falling-out with a company he had previously hailed as "a true American icon."

The EU responded to US tariffs on steel and aluminium, but hitting a series of American products with import taxes, including motorcycles, bourbon and blue jeans.

"We don't want to punish, but that is the unfortunate consequence, that (US companies) will put pressure on the American administration to say hey, hold on a minute, this is not good for the American economy," EU Trade Commissioner Cecilia Malmstrom said at a news briefing.

In a series of caustic early-morning tweets Trump dismissed any notion that his policies were responsible for Harley-Davidson's move.

"Early this year Harley-Davidson said they would move much of their plant operations in Kansas City to Thailand. That was long before Tariffs were announced. Hence, they were just using Tariffs/Trade War as an excuse," he said.

"When I had Harley-Davidson officials over to the White House, I chided them about tariffs in other countries, like India, being too high ... Harley must know that they won't be able to sell back into U.S. without paying a big tax!"

Last year, Harley-Davidson announced it would build a plant in Thailand after Trump pulled out of the Trans Pacific Partnership (TPP) trade deal, which would have abolished tariffs on their motorcycles across 40 percent of the world's economy.

"We see tremendous opportunity particularly in Southeast Asia and the investment in the plant in Thailand to get around the egregious tariffs and duties is a part of accessing a very important market," Harley-Davidson chief executive Matthew Levatich said in late April 24.

"We need to be there and be relevant," Levatich said. "It's very important to the long-term growth of the company as a segment within the international growth opportunity."

"A Harley-Davidson should never be built in another country-never!" he said on Twitter. 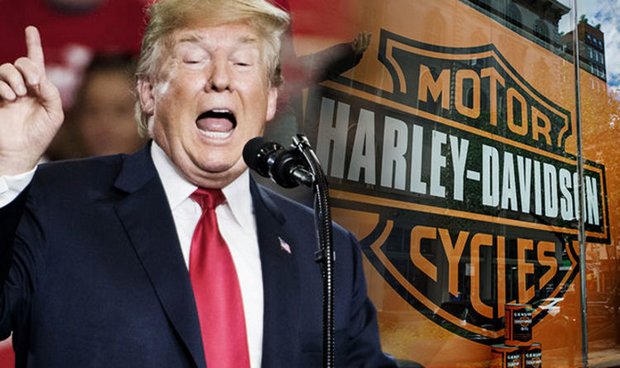 "Their employees and customers are already very angry at them. If they move, watch, it will be the beginning of the end - they surrendered, they quit! The Aura will be gone and they will be taxed like never before!"

Early this year Harley-Davidson said they would move much of their plant operations in Kansas City to Thailand. That was long before Tariffs were announced. Hence, they were just using Tariffs/Trade War as an excuse. Shows how unbalanced & unfair trade is, but we will fix it.....

....When I had Harley-Davidson officials over to the White House, I chided them about tariffs in other countries, like India, being too high. Companies are now coming back to America. Harley must know that they won’t be able to sell back into U.S. without paying a big tax!

A Harley-Davidson should never be built in another country-never! Their employees and customers are already very angry at them. If they move, watch, it will be the beginning of the end - they surrendered, they quit! The Aura will be gone and they will be taxed like never before!

That statement drew criticism from Eurasia Group president Ian Bremmer, who said on Twitter, "If the Germans started saying this about BMWs or the Japanese about Toyotas, that's a whole lot of Americans out of work..."

Details of the Harley-Davidson move to Thailand were disclosed in the Bangkok Post 13 months ago.

The Thailand plant will assemble motorcycles for Asia that were previously imported from India or the United States. 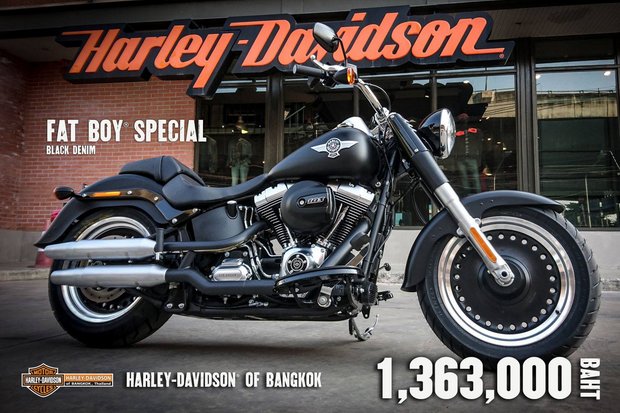 A current advert for a Harley-Davidson bike in Bangkok. The company says assembly of 'America's motorcycle' in Thailand will lower prices and allow immediate exports to all of Asean and China. (FB/HDBKK)

Harley-Davidson’s made-in-Thailand motorcycles will avoid the country’s up to 60% tariff on imported motorcycles. They would also get a huge break on tariffs when exported to Thailand’s neighbours, thanks to a trade deal among the 10 Asean members.

The Thai plant is also intended to help serve a vast market in mainland China. Asean is pursuing an enlarged free-trade area with Beijing. And McAllister of Harley-Davidson said the Thai plant would lower the transport and shipping time to the Chinese market to around five to seven days, from 45 to 60 days from the United States.

Trump's attacks were factually incorrect when he accused Harley-Davidson Inc of using his trade war with the European Union as an excuse to move production overseas.

A day after Harley said it would shift output of bikes destined for EU markets out of the US to avoid 31 percent tariffs, Trump cited two earlier decisions Harley made to open a new plant in Thailand and close one in Missouri.

Trump incorrectly connected the two decisions and threatened to tax any motorcycles the company ships into the US, even though the company is unlikely to import two-wheelers into its home market.

Harley made the decision to build the new factory to supply markets in Southeast Asia when it was clear the US would abandon the Trans-Pacific Partnership (TPP), the free-trade agreement Trump withdrew from in January 2017, Chief Executive Officer Matt Levatich said in an interview with Bloomberg News in April.

In a separate move linked to shrinking sales in the US and having too much production capacity for its domestic market, Harley announced in January a plan to shutter its plant in Kansas City, eliminating 260 jobs.

Trump wrote that Harley "must know that they won't be able to sell back into US without paying a big tax!" The company hasn't announced any plans to import motorcycles from overseas plants, so it's unlikely that the president's threat will turn out to be relevant.

"Our region is well renowned for the quality of its staff and its long tradition in the automobile and mechanical engineering sectors," Straumann said in the letter to the company.

Harley-Davidson did not immediately respond to request for comment, but said the move overseas was to avoid EU tariffs, not to sell in the US market.

The company has repeatedly described the Thailand factory, along with other overseas production, as vital to its long-term need to boost foreign markets to make up for sluggish sales in the US.

Harley-Davidson announced in January it would close its Kansas City, Missouri assembly plant and consolidate jobs in York, Pennsylvania.

Local US media reported in May that a labour union for Harley-Davidson suggested some Kansas City jobs would move to Thailand -- a move the company denied.