Classmates yearn for safe return of boys trapped in cave

A student shows a photo of her classmate Prachak Sutham, 13, who is a member of an under-16 soccer team that went missing with their coach at a flooded cave, in Mae Sai Prasitsart school, Chiang Rai, Thailand, on Monday. (Reuters photo)

MAE SAI, Chiang Rai: Classmates of 12 boys trapped in a flooded Thai cave spoke of their hopes for a miracle rescue Monday, as divers inched through thick mud and water towards an air pocket where the group is believed to be.

There has been no contact with the boys, aged between 11 and 16, since they went missing with their football coach nine days ago.

The massive rescue effort has been hampered by heavy rains that flooded the Tham Luang cave in northern Thailand, blocking access to chambers where it is hoped the group will be found alive.

Divers took advantage of a brief window of good weather on Monday to edge further into the cave, with forecasters predicting downpours could return in the coming days. Students pray in Mae Sai Prasitsart school as an ongoing search for members of an under-16 soccer team and their coach who went missing in a flooded cave continues, in the northern province of Chiang Rai, Thailand, on Monday. (Reuters photo)

Friends and teachers of the "Wild Boar" football team refused to give up hope of seeing the young players again.

Tilek Jana, 14, whose friend Prajak is among the missing, expressed his wish that his friend will soon return.

"Let him come and let's play (football) together, I miss him," he told AFP.

The principal of Mae Sai Prasitsart school, which is attended by six of the missing boys, said it had been a painful week.

"We chant and pray and send our support to them to give them power to wait for help to arrive," Kanet Pongsuwan told AFP.

RT ABC "Schoolmates of the 12 boys trapped inside a flooded cave in northern Thailand hold vigil for their friends' safe return. https://t.co/lqDfTt2Oe5 pic.twitter.com/BLWuAqATdQ"

Officials on Monday said the divers were less than 500m from an elevated area called Pattaya Beach where the boys are thought to be stranded.

"We are fighting against time and water to save the 13 lives," Chiang Rai governor Narongsak Osottanakorn said.

Scores of divers -- including foreign experts -- have been sent into the cave with hundreds of oxygen tanks, establishing a base camp inside the chambers over the weekend.

Aboveground several team were drilling into chimneys that may lead to new opening into the labrynth of darkned tunnels.

"The deepest one is 200 meters and we will continue that operation. If we manage to though the cave walls, then luck is on our side," the governor Narongsak said.

Weary-faced relatives have camped out at the cave's entrance for more than a week, desperately waiting for news from the boys, while the head of the Buddhist clergy has urged prayers from a nation fixated on the fate of the group.

The youth football team and their 25-year-old assistant coach went into the cave on June 23 after a training session and got stuck when heavy rains cut them off from the entrance. 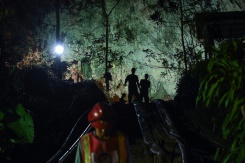 Rescuers found their bicycles, football boots and backpacks near the cave's entrance, and discovered handprints and footprints further in.

But those are the only signs of the boys so far and no one knows if they are still alive.

They likely have access to fresh water inside the cave and officials believe they brought snacks into the cave and possibly headlamps too.

Even without food experts have said young, athletic boys could survive for several weeks if they are not injured -- and don't attempt to escape through deep floods.

Yet it remains a perilously urgent rescue.

Officials have dropped survival kits with food, medical supplies and a cave map into a crevice in the hope some of the relief will reach the boys.

At 10 kilometers long, Tham Luang cave is one of Thailand's longest and one of the toughest to navigate, with its snaking chambers and narrow passageways.

A sign outside the site warns visitors not to enter the cave during the rainy season between July and November.