TUNIS - Six members of Tunisia's security forces were killed Sunday in a "terrorist attack" near the border with Algeria, the interior ministry said, the country's deadliest such incident in over two years. 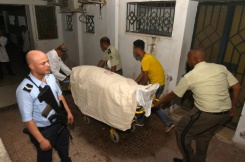 Hospital personnel and colleagues of a Tunisian member of the security forces killed in a landmine ambush in the Jenduba border province, transport his body hospital in the capital Tunis on July 8, 2018

The Tunisia-based division of Al-Qaeda in the Islamic Maghreb (AQIM) late on Sunday claimed responsibility for the assault.

The attack comes as Tunisia is hoping for its best tourist season since a spate of jihadist attacks in 2015 sent visitor numbers plunging.

A national guard border patrol in the Ain Sultan area of the Jenduba border province "was hit in a landmine ambush that killed six agents" at 11:45 am (1045 GMT), the ministry said in a statement.

Ministry spokesman General Sufyan al-Zaq said the blast was a "terrorist attack" and that assailants had "opened fire on security forces" after the mine exploded.

"Combing operations" were under way, said Zaq, who had earlier told AFP that eight guards were killed in the attack.

AQIM said in a statement its "mujahadeen detonated an explosive device on the two vehicles of the enemy and clashed with them", claiming that nine soldiers were killed, according to the SITE group that monitors jihadist online activity.

"We are aware that the war on terrorism will be long," interim Interior Minister Ghazi Jeribi said on state TV, adding that three security forces were also wounded in the attack.

"We will go into their (the terrorists) dens and we will avenge the Tunisian people," said Jeribi, who was ordered to go to Jenduba.

A memorial service for the victims is to be held on Monday in Tunis.

The attack is likely to exacerbate an ongoing political crisis in Tunisia, where Prime Minister Youssef Chahed, who recently fired the previous interior minister, is facing heat from his own allies.

There are regular attacks along the Algerian border, but this was the first time in two years security forces suffered such a loss.

Algeria's foreign ministry "strongly condemned the terrorist attack", while the European Union offered its condolences and pledged its "full support" to Tunisia "in the fight against terrorism".

France's foreign affairs ministry also condemned the attack and said it would "stand with the Tunisian people and authorities at this difficult time".

Sunday's assault marks the bloodiest attack in Tunisia since a March 2016 attack on security installations in the town of Ben Guerdane on the Libyan border.

Tunisia's tourism industry is still rebounding from a string of devastating attacks in 2015, including one at the National Bardo museum in Tunis and another targeting a beach resort in Sousse that together killed 59 foreign tourists and a Tunisian guard.

In May, Tourism Minister Selma Elloumi Rekik said the industry had made a "real recovery".

"People are coming back to Tunisia because there is security... we are at the same level (of security) as any European city," she said.

Since the 2011 uprising that toppled dictator Zine El Abidine Ben Ali, jihadist attacks in Tunisia have killed dozens of members of the security forces and foreign tourists.

Since Ben Ali's fall, "at least 127 militants and 118 soldiers, national guardsmen, and police officers have been killed in the northwest", according to figures compiled by analyst Matt Herbert and published in June by the Carnegie Endowment for International Peace.

"This new attack shows that there are still pockets where security problems have not been solved," he told AFP on Sunday, while stressing "the vast majority of Tunisia remains safe".

The country has been under a state of emergency since November 2015, when an IS-claimed suicide bombing in Tunis killed 12 presidential guards.