Boasting a long coastline, tropical Vietnam is battered by floods and storms every year, with hundreds of lives lost from the annual monsoon barrage.

The remnants of Typhoon Son Tinh, now a tropical depression, made landfall Wednesday night, the third tropical storm to hit Vietnam since the start of the year.

The latest report from the country's disaster office said 19 people have been killed so far, with an additional 13 people unaccounted for.

Floods and landslide from heavy rains have ranged far and wide and impacted rural and urban areas, including the capital Hanoi.

They are expected to continue in the coming days. 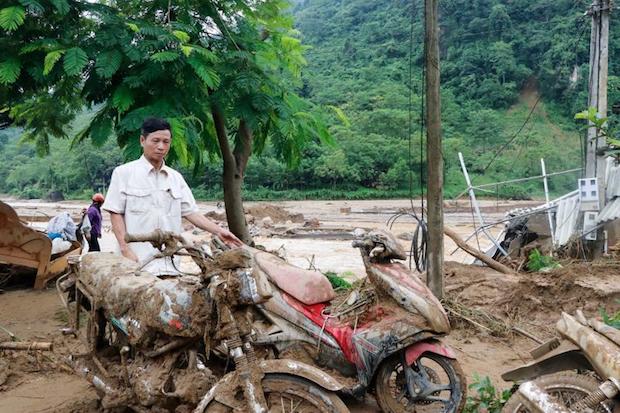 State-controlled VNExpress news site reported Saturday that residents in Chuong My district on the outskirts of Hanoi were asked to leave their homes and get to higher ground for fear of heavy floods.

"We must be active in moving our furniture out of homes. From last year's experience, we did not have time to run," a local resident was quoted as saying.

"My house is in a very low location so I have to move all the rice to higher places," resident Nguyen Duy Dong told VNExpress. "Since the afternoon, we have moved more than one tonne of rice."

The amount of land under siege has also spiked, with more than 15,000 houses damaged or destroyed and more than 110,000 hectares of crops inundated. Several roads have also disappeared under the water.

Vietnam's rainy season, like other countries in the region, is between June and November, but the death toll from stormy weather has often exceeded its neighbours.

Last year, 389 lives were claimed by natural disasters, with material damages reportedly reaching $2.6 billion, according to the government.