People are seen on a vehicle on Thursday as they travel during the flood after the Xe Pian-Xe Namnoy hydropower dam collapsed in Attapeu province. (Reuters photo)

Relief supplies from His Majesty the King and the government have arrived in southern Laos as more are on the way to help Laotians affected by a dam collapse.

Relief supplies of His Majesty and 5,000 relief bags of the Thai government reached Pakse airport in Laos' Champassak province by two C-130 transport planes of the Royal Thai Air Force 1am on Thursday.

Pakse is the closest airport to the areas devastated by flooding after the collapse of the Xe Pian-Xe Namnoy Dam in Attapeu province on Tuesday.

Mukdahan, Sakon Nakhon, Nakhon Phanom, Udon Thani, Nakhon Ratchasima and Si Sa Ket are among provinces where officials are gathering supplies to be handed over to Lao authorities.

Rescuers braved rains to reach scores of people going missing after the dam collapse in Attapeu's Sanamxay district. (continues below) 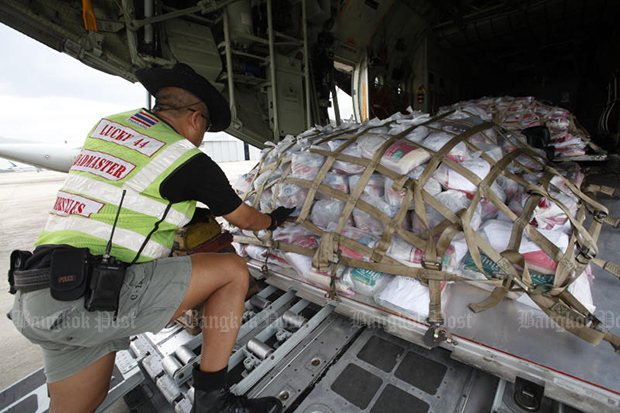 A soldier loads more supplies into a C-130 plane at the Royal Thai Air Force main base in Don Muang district for another flight to southern Laos on Thursday afternoon. (Photo by Pornprom Satrabhaya)

At least 26 people died, while Lao Prime Minister Thongloun Sisoulith said 131 others are missing after 5 billion cubic metres of water inundated vast areas in the district.

The English-language Vientiane Times, citing a district governor, reported that the flooding left 6,000 people homeless. Mr Thongloun said at a news conference that about 2,800 people in need of rescue have all been saved.

Troops searched for survivors in the remote southern tip of Laos on Thursday, three days after the collapse of a hydropower dam sent a torrent of water across paddy fields and through villages, as rescuers rushed aid to thousands of the homeless.

A situation report from the UN Office for the Coordination of Humanitarian Affairs said roads and bridges were damaged and eight villages had been hit by flash flooding after the failure of the dam. It said boat and helicopter were the only means of transport in the affected areas.

Schools in safe areas were being used as evacuation centres and about 1,300 families needed tents for shelter, it said.

Phra Ajarn Thanakorn, a monk returning from Sanamxay, said he had delivered food and medicine in four pick-up trucks that had come from Vientiane, the capital some 800 kilometres to the north, and he was heading back there to bring more.

"The situation is really bad," he said. "All the relief efforts are at Sanamxay. There are volunteers distributing food and medicine for survivors every day there. They still need food, medicine, and coffins."