A badly damaged house is seen in Mataram on Indonesia's Lombok island on Monday after a series of earthquakes were recorded by seismologists throughout August 19.(Photo by Handout / BADAN NASIONAL PENANGGULANGAN BENCANA / AFP)

SEMBALUN, Indonesia: Multiple strong earthquakes killed at least a dozen people on the Indonesian islands of Lombok and Sumbawa as the region was trying to recover from a tremblor earlier this month that killed hundreds of people.

A shallow magnitude 6.9 quake that hit about 10pm was one of several powerful earthquakes Sunday in the northeast of Lombok that also caused landslides. The night-time quake was followed by strong aftershocks.

More than 1,800 houses were damaged, at least half of them severely, he said.

The swarm of quakes caused panic in Sembalun subdistrict on Lombok in the shadow of Mount Rinjani, but many people were already staying in tents following the deadly jolt in early August and its hundreds of aftershocks. On Sumbawa, a neighbourhood was engulfed by a fire that started in a collapsed house. 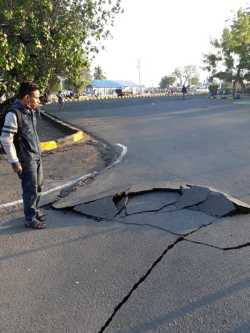 A man looks at a crack on a road at Kayangan Port after an earthquake hit Lombok, Indonesia, on Monday in this picture obtained from social media. (Bayu Wiguna/via REUTERS)

“People panicked and scattered,” Nugroho said. “Some people are hysterical because they feel earthquake aftershocks that are harder than before. They heard a roar that probably came from landslides in the hills and Mount Rinjani.”

Dwikorita Karnawatim, who heads Indonesia's Meteorology and Geophysics Agency, said buildings that haven't collapsed so far have suffered repeated stress, and authorities have urged people to avoid both the mountain's slopes and weakened buildings.

Sunday night's tremor occurred on a different fault and was not an aftershock of the magnitude 7.0 quake on Aug 5 that killed 460 people, damaged tens of thousands of homes and displaced several hundred thousand people.

The quake lasting five to 10 seconds also was felt in the neighbouring island of Bali and as far away as East Java and Makassar in Sulawesi.

Rinjani has been closed to visitors following a July earthquake that killed 16 people, triggered landslides and stranded hundreds of tourists on the mountain.

Indonesia, a sprawling archipelago that straddles the Pacific “Ring of Fire,” is prone to earthquakes and volcanic eruptions.

INDONESIA QUAKE: A 6.9 magnitude earthquake rocked the Indonesian tourist island of Lombok – the same island where more than 400 people were killed during another earthquake earlier this month. @TomLlamasABC reports. https://t.co/zHRBBxfEIm pic.twitter.com/YjW8RmP1y2

Breakthrough in Venezuela talks spurs US to ease embargo