SYDNEY: China has blocked access to the website of Australia's national broadcaster for breaching Beijing's internet rules and regulations, ABC said on Monday. 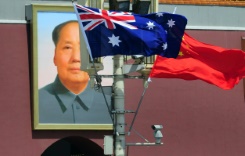 It comes a year after the Australian Broadcasting Corporation began running a Chinese-language service.

ABC said access to its website and apps was blocked on August 22 and it has since been trying to find out why.

After repeated requests for clarification, an official from China's Office of the Central Cyberspace Affairs Commission dictated a statement to the broadcaster.

"We welcome internet enterprises from all over the world to provide good information to the netizens of China," said the official, who declined to give his name, according to ABC.

"However, state cyber sovereignty rights shall be maintained towards some overseas websites violating China's laws and regulations."

ABC said it had not been told what laws it had violated or which content sparked the ban.

However, ties between Canberra and Beijing have been strained recently over allegations that China is interfering in Australia's domestic politics and using donations to gain access.

The claims infuriated China, which has dismissed local media stories -- including by ABC -- about infiltration as hysteria and paranoia.

The ABC also recently reported on Beijing's push into the Pacific through "soft diplomacy", which Australia and New Zealand fear could potentially upset the strategic balance in the region.